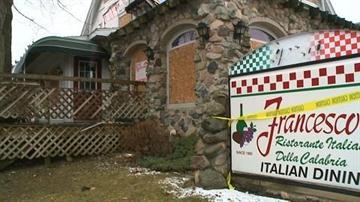 MISHAWAKA, Ind. – A fire that ravaged a long time restaurant in Mishawaka Monday morning has been reportedly called suspicious by the Fire Marshal; much to the chagrin of police detectives.

Wednesday evening, a Mishawaka fire fighter relayed a message to ABC 57 from one of the department’s Fire Marshals after a request for information was placed with the organization.

The message was that all requests would have to go through the police department, because the investigation was now in their hands.

But according to Captain Pasquale Rulli that is not the case. Rulli oversees the detective bureau at the police department and he is the one who assigns cases, so he would know if the fire was being investigated by one of his detectives.

From there, his detectives will conduct an investigation to determine if enough evidence is available to charge someone with a crime that would lead to a successful conviction, said Rulli.

Comments Fire Marshal George Schafer made Wednesday, that the fire was “suspicious,” dismayed Rulli; who points out that no evidence of criminal activity has been found by police detectives.

Rulli put forward a possible catalyst for the pressure some media outlets have shown in wanting to label the fire, as a misleading categorizing of the police report.

According to Rulli, one of the shortcomings of the departments records system is that it assigns a category to each case so that it can be assigned to the appropriate department or specialty group.

In the case of the fire at Francesco’s Italian Restaurant, the report is labeled as an arson; however, that does not mean that it was an arson, according to Rulli.

Rulli’s detectives have yet to do any investigating of the incident, which may turn up as something other than arson.

Right now they don’t know what or who started the fire, and until they do, Rulli is cautious not to label it prematurely. “Until there is a cause and origin, there’s really [nothing]. You just wait and find out [when] you have facts,” said Rulli.