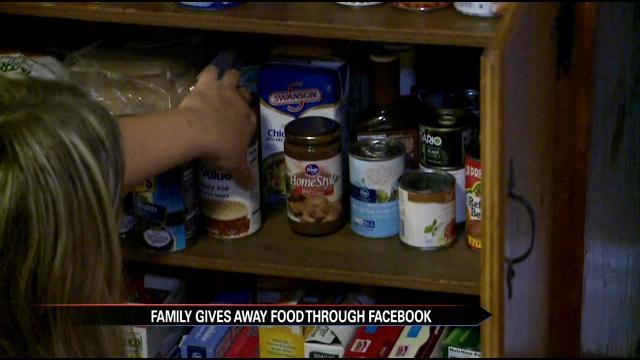 One Mishawaka family came up with a very creative way to clean out the cupboards and reach out to those who may need a little extra this holiday season.

On Friday Stacy Gonzales and her daughter Selena were cleaning out their kitchen after Thanksgiving and realized they had a lot of food.

Selena suggested to her mom that they would play a game on Facebook. They would post that they had food to give away and have the public guess a number between 95 and 700.

Stacy says she was surprised to see over 400 comments on the post. Now she has a huge box full of food to give away to the winner and she describes why she choose such a creative way to help someone in need.

“I guess the reason why the game appealed to me, the Facebook game, was because you got to meet the person you were helping face to face that you were helping. A lot of the times when you donate things to a church you don't know who it is going to. A lot of friendships can come out of those things or you know even someone to talk to, because someone may need someone who will listen,” says Stacy.

Brandon Pangallo, a Mishawaka resident says he saw the post on his feed and seeing that someone was giving food away he thought it could really help him and his fiance.

“That night she, her daughter texted me and said that I ended up getting the prize. So it's really nice to see that somebody is actually trying to help people out anymore. And somebody came forward to help us out so I want to try to help somebody else out now,” says Pangallo.
Share this article: