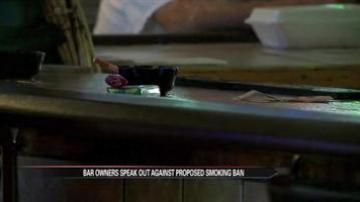 He's asking for there to be no smoking allowed inside bars. Bar owners in Mishawaka say they wouldn't survive if that happened.

Council member Ferlic says money is not as important as public health.

"A lot of women work in the service sector industry. If she were to become pregnant, then she would have to make a choice between the health of her baby or her job," said Ferlic.

One bar owner spoke up.

"If Dr. Ferlic were to lose all of his patients, he would have to leave town. That's exactly what's going to happen in South Bend. If they go smoke-free, all those customers are going to come to Mishawaka," said Larry Wolfe, owner of The Blue Lantern.

No written ordinance has been brought to Mishawaka City Council. Council member Ferlic will bring this matter up again to South Bend Common Council on July 14th.