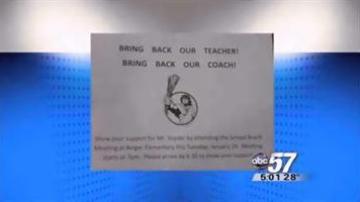 MISHAWAKA, Ind. -- Some parents from Mishawaka High are expected to take a stand in support of wrestling coach Darrick Snyder.

He coached during the recent sexual assault claims. A flyer has been seen circulating on Facebook satiating, “Bring back our teacher. Bring back our coach.”

Snyder is currently on administrative leave.

A judge has ruled most court hearings surrounding the sexual assault claims at Mishawaka High School will be kept private.

A Mishawaka student claims he was sexually assaulted two years ago by six of his wrestling teammates. The prosecution asked for restrictions in the case based on the ages of those involved, and the nature of the allegations.

The judge agreed to keep the teens' testimony, as well as some police testimony closed to the public.

Parents and other supporters are expected to rally at the Mishawaka School Board meeting at 7 Tuesday night, at Beiger Elementary.