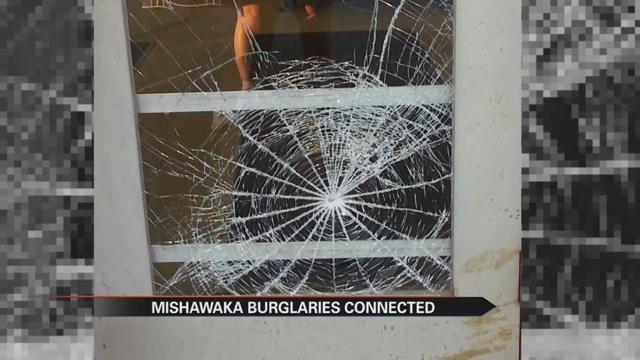 Three Mishawaka stores are picking up the pieces, after a string of burglaries occurred within 20 minutes of each other early Monday morning.

The Mishawaka Police report shows similarities between the three crimes, such as what the suspect looks like, and how he gained entry to each of the stores.

It all started Monday morning at 3:45 a.m. The Bell Mart on Bremen Highway in Mishawaka was burglarized.  Just 16 minutes later, City Wide Liquors on 8th street's alarm went off. 20 minutes after that, the Cash Land Pawn Shop on Milburn Blvd. was also broken into.

Tara Monroe is a cashier at the Bell Mart. She says the suspect didn't take much, and "only took envelopes and a clipboard.  No meaning to the store whatsoever."

"What a waste of a window," Monroe adds.

That wasn't the case at the Cash Land Pawn Shop.  Five TV's were stolen from their store.

But City Wide Liquors was lucky.  Nothing was taken, because the suspect couldn't get through the glass.

"It's definitely worth the money to get the better glass, and to take the extra steps and precautions," Norman says.

All three stores are happy that no one was hurt, and hope that the suspect is caught soon.