Mishawaka man accused of beating his dog to death 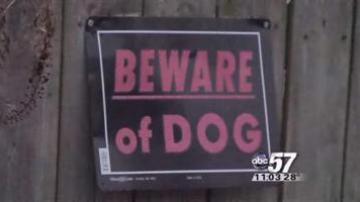 MISHAWAKA, IND. --The Mishawaka police department and the St. Joseph County Humane society are conducting an investigation to find out if 33-year-old Chris Dennaway murdered his dog.

Scott claims Dennaway beat the dog over a three-year period, hitting it so hard with a broom that the handle broke.  Police found the dog wrapped in a mattress cover in Dennaway's garage.

Dennaway claims he didn't beat his dog to death, and states the dog quit eating after Thanksgiving and he didn't have the money to take it to the vet so it died, but neighbors, had other ideas about what happened to the dog.

Neighbor Jackie Russell, said she was disgusted when she heard the allegations that her neighbor Chris Dennaway beat his dog to death

"It makes me sick," said Russel.

Dennaway's dog Apollo got sick and died so he put it in his garage until the ground thawed.  He planned on burying it in his backyard.

"He was just playing with it in the yard with the little boy," said Russell.

But she said police have been called to his home in the past.

“Well we have seen some police cars go down there," said Russell.

But three other neighbors said Dennaway did neglect the dog, leaving it outside in the cold and didn’t feed it..

Now that neighborhood – just wants to know what really happened.

The St. Joseph County Humane Society is still determining the cause of the death of the dog.  Once the cause is known, the Mishawaka police will decide if Dennaway will face charges.