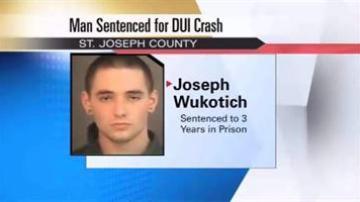 ST. JOSEPH CO., Ind. -- A man previously given a $2 million bond is now heading to prison.

This sentence stems from an incident that happened back in March when police said Wukotich was driving drunk. He struck a car, causing it to rear-end another vehicle, and seriously injured three people.

Wukotich pleaded guilty on two counts of causing serious bodily injury while operating a motor vehicle while intoxicated. Each is a class D felony.

Each offense carries a penalty of six months to three years of prison time. The maximum possible sentence would be six years, since there were two counts. Prosecutors said that Wukotich received the recommended sentence.

We checked with the St. Joseph County Prosecutor's office about another ongoing case where Wukotich was accused of stabbing a Mishawaka man. They confirmed that the trial for this is scheduled for Aug. 27.