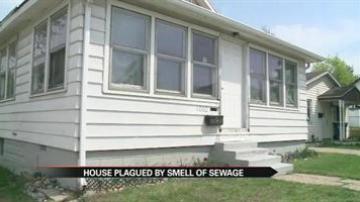 MISHAWAKA, Ind. -- Residents of South Ironwood Drive in Mishawaka say they are dealing with a smelly problem and they can't find the source. They say the sewage smell has gotten unbearable and is making them sick.

The Mishawaka Sewer Department director says there could be a variety of causes for the smell in the home, but the lingering smell should not be from the maintenance work done on South Ironwood over the past few weeks.

The sour, foul odor has invaded every part of Karen and Dave Zillmer's home.

They say they've done all they can to eliminate the stench.

"You can Febreeze, you can Pine Sol, you can put bleach down the drains, you can stuff rags in, you can run the water, it doesn't matter. It's overpowering. It can give you a headache," said Karen.

Although they recently installed brand new plumbing in their entire home, they say they wonder if there could be a crack in the main sewer line that runs underground to the road.

"This house was built in the 20s so it's quite a few years of having that pipe down there," said Dave.

Plumbers told the Zillmers it would cost a lot to dig up their front yard and part of Ironwood Drive.

They say they will keep digging for answers and for a solution to their smelly problem.

"We haven't really gotten any answers as far as what we can do. They want us to hire a plumber and have a plumber come out and things like that," said Dave.

The Mishawaka Sewer Department director says they have sent crews out to Ironwood multiple times to check for a problem in the sewer lines after receiving complaints from neighbors.

He says each time they haven't found any problems underground that would cause an odor.