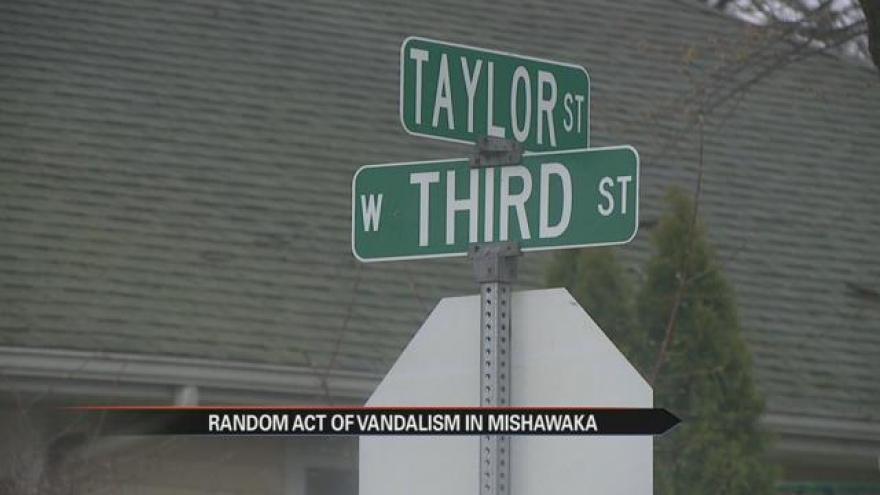 Two families living on Mishawaka’s West Third Street were seemingly targeted by a random crime Wednesday morning, leaving them with hundreds of dollars of damages.

“Early in the morning, I walked our dog, I walked right past here, didn’t even notice it,” Jeff Schimes said. “We were parked over there; our neighbor was parked where we are.”

It was a typical morning for Schimes, who’s still settling into his new Mishawaka home on the 800 block of West Third St. he moved into with his family just three days ago.

But about an hour after walking his dog Wednesday morning, his neighbor came to speak with him.

“Came to our door, knocked on the door and said somebody was beating up our cars,” Schimes said.

He immediately ran outside.

“And I looked at my car and we’re missing, there’s a hole about yay big on the other side, and I looked at the neighbor’s car, she had a similar thing,” Schimes said.

His rear windshield was shattered, as well as his neighbor’s front and back car windshields.

“And I immediately called the police and they came out, said, you know, this happens,” Schimes said.

Schimes replaced his windshield Thursday afternoon, paying $230 of his own money for the repair.

But he’s still trying to figure out why this all happened, especially just days after he moved in.

“I don’t hold it against Mishawaka,” Schimes said. “From my experience, Mishawaka, it’s a good town! You know, that’s why we moved here. We chose to come to a better town, you know? It’s just random, bad circumstances, is the way I look at it.”

Mishawaka Police say they believe the damage was done by a BB gun and that this was a random incident.

No suspects have been identified.

Schimes’ neighbors told him they saw a black van circling the block Wednesday before this all happened, but they’re not sure if it was involved.