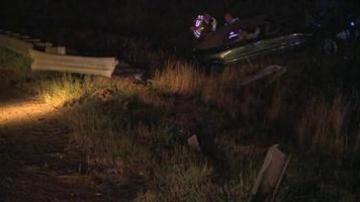 MISHAWAKA, Ind. -- St. Joseph County Police are investigating an accident that claimed the life of a 17-year old Mishawaka teenager.

Police say 3 teenagers were involved in a single-car rollover crash while heading southbound on Capital Avenue in between the Jefferson and Lincolnway intersections in Mishawaka around 12:45 a.m. Monday.

Officers say two of the teens, ages 17 and 18, were uninjured. The 17-year-old driver was ejected from the vehicle and taken to Memorial Hospital. He died less than two hours later.

The surviving teens told police that they were on their way home from a late-night movie traveling at a high rate of speed when the driver lost control.

The car veered off the road and through the guard rail, then the vehicle rolled until they landed in a ditch.

Police have yet to determine the cause of the crash, but their investigation is still ongoing.

Officers say they're awaiting the results of the toxicology test to determine whether or not alcohol was a factor, but it could take weeks for the results to be completed.