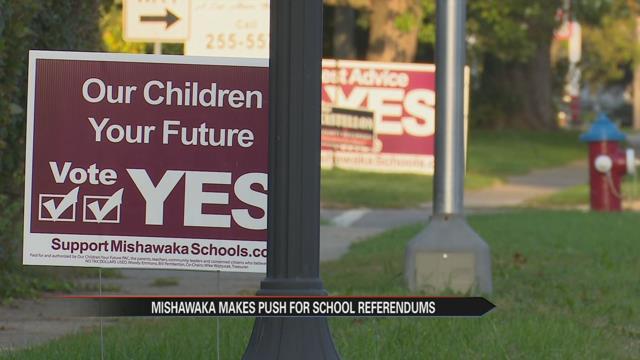 The school corporation is asking voters to pass two referendums, each advocating for needed improvements in the district that taxpayers would cover.

Monday, the mayor and the city’s common council publicly endorsed those ballot measures because, they say, there’s a bigger price to pay if they don’t pass.

This was his and others last ditch efforts to win support of voters before Election Day.

“It’s not only that they want to have quality education, but I think many people see this as an investment in their own property,” said Speicher.

Support for two turn-around referendums have been popping up all around Mishawaka and supporters are now popping up inside city hall.

“We feel that this will allow Mishawaka schools to prosper, to do well and to attract great students,” said Mayor Dave Wood.

The fate of Mishawaka schools will rest in voters hands.

The district says many upgrades and repairs are needed.

If the referendums are passed, the Mishawaka City School system will take in an additional $1.8 million each year for the next seven years and $13 million for the capital project payable over 15 years.

And that’s crucial funding according to the district.