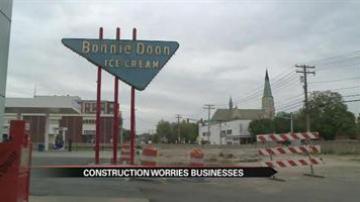 MISHAWAKA, Ind. -- Boonie Doon's Ice Cream first opened its doors in downtown Mishawaka in 1936. Now the company can no longer afford to do business on 4th Street. A spokesperson claims it is because of road construction and nearby businesses are concerned for their future as well.

Construction season is winding down in Mishawaka.

But for Ricky Singh, the financial impact is just being felt.

"It's crazy the way it's working," said Singh, owner of Rick's Gas.

Singh says he has lost more than half his business since construction started almost 6 months ago.

He's concerned about the closing of Bonnie Doon's right next door. He worries it could happen to him.

"This is to the point where it's getting hard right now," said Singh.

Singh and other area business owners say the road closures are killing them.

"This is really unusual here and it's taking an extremely long time," said Jones.

Time they don't have.

Both Singh and Jones say the city hasn't been transparent about ongoing road work and they weren't able to plan properly.

"They never contacted me at all. I had no idea that this was going to happen," said Jones.

That's the same thing we heard from Bonnie Doon's, a Michiana icon for 75 years!

So we went straight to city hall to see where the disconnect was.

No one had 5 minutes to talk on--camera but they said they meet with affected business owners daily.

We asked Singh if he ever got a phone call or letter from the city.

We tried calling both the city engineer and street department to find out more about this construction project.

We're still waiting for a call back but city employees say they definitely gave notice to surrounding businesses.