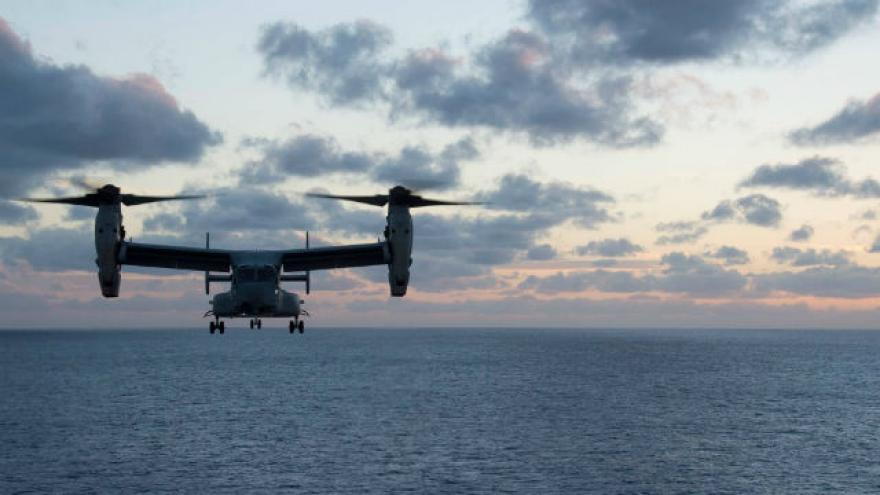 (CNN) -- The US Marine Corps has identified three Marines who died after a US military aircraft ditched into waters off Australia's east coast on Saturday.

The three were declared dead after "extensive search and rescue efforts" around the crash site, around 18 miles off the coast of the Shoalwater Bay Training Area, Queensland, Australia. Their remains were not recovered, Marine Expeditionary Unit spokeswoman Lt. Christina Metzler confirmed to CNN.

"The loss of every Marine is felt across our entire Marine Corps family," Col. Tye Wallace, commanding officer, 31st Marine Expeditionary Unit, said in the statement.

The Marines "left a lasting impression on the 31st MEU, the Marine Corps, and the world. They will live on forever in our thoughts and our hearts," he said.

Earlier, the Australian Navy had located the missing US military MV-22B Osprey tiltrotor aircraft that crashed off the Queensland coast, Defense Minister Marise Payne said in a statement Monday.

Twenty-three of the 26 personnel on board the aircraft were rescued, the Corps said.

US military aircraft and boats scoured ocean waters off Australia searching without success for the three missing Marines. A sea search off Australia's east coast for the missing was called off early Sunday, the military said.

The families of the missing Marines have been notified, the military said.

"We're gonna miss FaceTime with him whenever he got a chance and certainly any leave that he would have gotten," said Cross' father Robert Cross.

Valerie Cross, the Marine's mother, said, "we have so many awesome memories, but to know that we will never make any more with him is unbearable."

Cross had attended the Virginia Military Institute on a Naval ROTC scholarship, according to his alma mater. He was a V-22 pilot from Bethel, Maine, according to a short tribute video released by the Marine Corps.

The accident occurred while attempting to land the aircraft on a Navy ship, a statement from the Virginia Military Institute said.

The parents and brother passed along their condolences to the families of the other Marines killed in the incident.

Ordway was a V-22 crew chief from Wichita, Kansas.

Velasco was a field artillery fire control Marine, from West Covina, California, according to the Marine Corps.

The US military has been in the area for training exercises with the Australian military.

"The aircraft involved in the mishap had launched from the USS Bonhomme Richard (a Navy amphibious assault ship) and was conducting regularly scheduled operations when the aircraft entered the water," the Marine Corps said in a statement.

Crew on board the Bonhomme Richard were performing water training exercises Saturday, according to the ship's Facebook page. The exercises were a followup to joint military training between US and Australian forces that wrapped up last week.

Australian authorities said no Australian personnel were on board.

The recent joint military exercise took place largely in Shoalwater Bay and involved more than 30,000 US and Australian personnel, according to Australian Defense Department.