Mississippi and Missouri rivers will crest Saturday, so flooding isn't over for Midwest 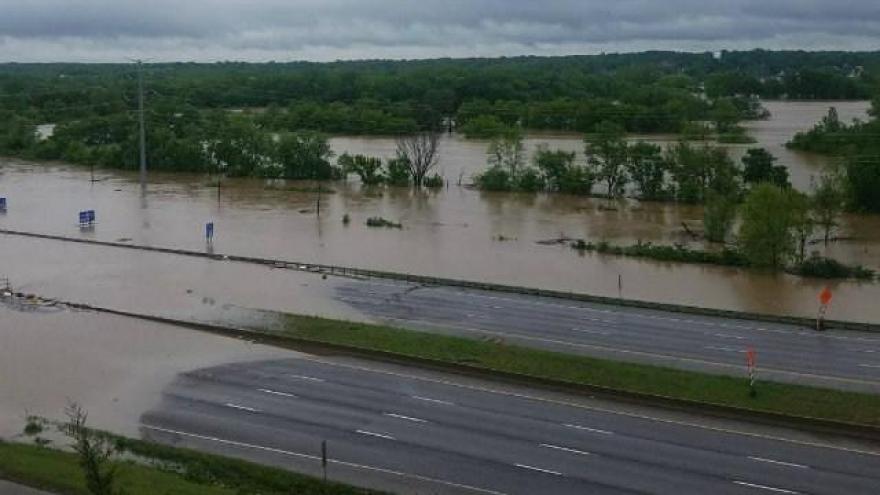 (CNN) -- Some rivers and streams are receding after days of rain caused widespread flooding in the central United States, but the region isn't out of danger yet: forecasters say the Missouri and Mississippi rivers will crest Saturday in and around St. Louis.

Aerial photos and video from the St. Louis region and other areas show the devastating impact of the flooding that has caused as many as a dozen deaths and shut down transportation in parts of the region.

Brian Emfinger, a reporter for CNN affiliate KATV, took aerial images and video of flooding near Pocahontas, Arkansas, in the northeastern part of the state, where floodwaters overtopped a levee.

Gov. Asa Hutchinson posted an aerial photo of a Walmart in Pocahontas surrounded by water, as well as the flooding that has impacted roads nearby.

In the past week, flooding has caused seven deaths in Arkansas, including a 10-year-old who was climbing a fence to avoid the water and was swept away, according to the state's Department of Emergency Management.

Five people have died in Missouri due to or related to the flooding, officials said.

The flooding impacted more than 100 highways in the St. Louis region, according to Tom Blair, an official with the Missouri Department of Transportation.

The Meramec River, which travels through suburbs of St. Louis, rose to a record 46.11 feet after weeks of heavy rainfall.

Three hours to the southwest, in Willow Springs, Zeb Cheek and his family lost almost everything.

"We lost our car, our cat, and nearly everything else in the house. And we no longer have a home," he said. "We managed to save my work computer, some clothes, our dog and a few photos."

Cheek and his wife rent their home, but he suspects the landlord will have to strip the house to its joists to salvage it.

The area has seen minor flooding before but Cheek, an aerial photographer, says it's never been like this.

"My wife collected some clothes and our kids while I went to warn the neighbors to get out," he told CNN. "In the time it took me to get back, roughly 10 minutes, the water had risen from my ankles to my waist. I was barely 100 feet from my front door and didn't hear my wife calling for me at the top of her lungs."

Escaping the house, however, didn't guarantee the family's safety.

"The waters were roaring ... badly," he said. "When we left, the water was coming into our van, and we were nearly trapped."

The Cheek family is staying at a home arranged by their church.

Meanwhile, residents of central and southern Illinois prepped for their own coming floods as rain continued to fall.

The Mississippi River that separates Missouri and Illinois is projected to reach 48.5 feet on Saturday near Cape Girardeau, just below its record high of 48.9 feet.

Forecasters said the time to be worried about moderate to heavy rainfall in those states is between 9 p.m. and 4 a.m., mainly in southern Illinois.

In eastern Illinois, officials in Villa Grove said they had prepared boats for possible rescues and police were ready to block off streets in case of flooding, according to CNN affiliate WCIA.

Traci Belshe, who lives in the community southeast of Champaign, told WCIA that previous flooding has caused more serious issues.

"We've had people trapped in their homes, having to be boat rescued out while that gas leak is occurring," Belshe said. "I myself have been trapped in this home three different times."