Mistakes still trouble the Irish as they look forward to Louisville 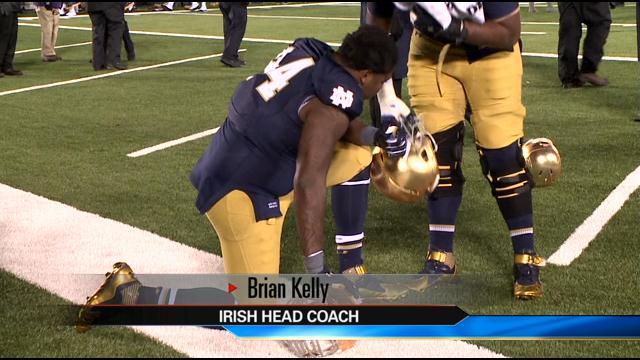 Notre Dame will face the Louisville Cardinals for the first time ever this Saturday and the Irish are looking to recover from last week's stinging loss to Northwestern.

“We're going to fight through this rough spot, this is a rough spot for us,” Irish Head Coach Brian Kelly said Tuesday.

Notre Dame's "rough spot" is the result of two things, according to Kelly. One, is inexperience.

“We've never been as young as I've been on defense, so that's difficult,” Kelly said.

And the other, is preventable mistakes.

“We've never had this much difficulty holding onto the football on offense at the same time,” Kelly said.

They are mistakes that Kelly says have cost his team plenty of points, the last two football games and a 9-1 record.

“When we turn it over, it's critical, it's catastrophic turnovers. We're turning it over on the five-yard line, on the goal line, we're throwing it off of our kids' helmet, it's bouncing up in the air and they're returning it,” Kelly said.

When it comes to limiting turnovers, this week could be the most critical, as the Irish offense will face Louisville safety Gerod Holliman, who has snatched up 13 passes this season, just one short of the NCAA's all-time interception record.

“They're very good ball skill kids in the back end, but they're reading eyes, if Everett stares down anybody in his zip code, he's going to go take the ball away,” Kelly said.

And that is exactly what Kelly says he wants to avoid.

“If we take care of the football, get lined up on defense, we're going to be fine this weekend,” Kelly said.

This is the fourth time Notre Dame will take on an ACC team this season as part of their scheduling agreement with the Atlantic Coast Conference.