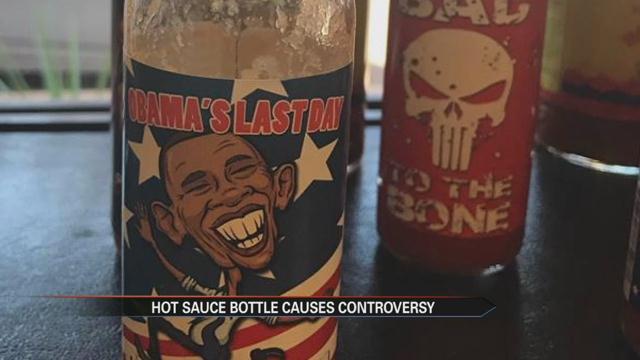 A politically labeled hot sauce found at a South Bend café has some folks fired up, and not in a good way.

A Chicory Café visitor posted photos of the sauce online that have been shared nearly 300 times.

The post says she found the bottle at the restaurant.

The bottle's label has has a caricature style drawing of President Obama, and a description that says in part “The day Obama moves out of the white house will be the day that America gets rid of the worst president in the history of the United States.”

“It is a bad thing. It’s not a good thing. It’s an evil thing,” Eilene Bennet said after a friend showed her the post.

While Bennett is appalled, others, like Joel Remaley feel indifferent.

“With the presidential election and all the hype that’s surrounding it, I think there’s other things we need to be worries about other than hot sauce,” Remaley said.

“The Chicory is a nice place,” Bennett said.

In a statement on Facebook, Chicory says in part:

“…this bottle was included in a large pack of sauces we had received as on online order. The offensive hot sauce was set aside in the back office, but somehow made it out onto our shelf for customer use. As soon as the bottle was brought to our attention by a caring guest it was immediately disposed of."

They go on to apologize several times adding:

“Chicory has always been a home to everyone, and we don’t intend to be otherwise.

The company that makes the sauce is Mo Hotta Mo Betta.

The Georgia company that sells a number of sauces with similar labels, political and otherwise, including Trump and Bernie Sanders sauces.

As for Bennett, she won’t be ordering any condiments from the company, but neither she nor Remaley say they’re holding it against Chicory.

“It’s not maybe necessarily their standpoint on Obama. Maybe they just like the hot sauce,” Remaley said.

Bennett says she won’t hold it against the café either.

“I don’t think it was the restaurants fault,” Bennett said.