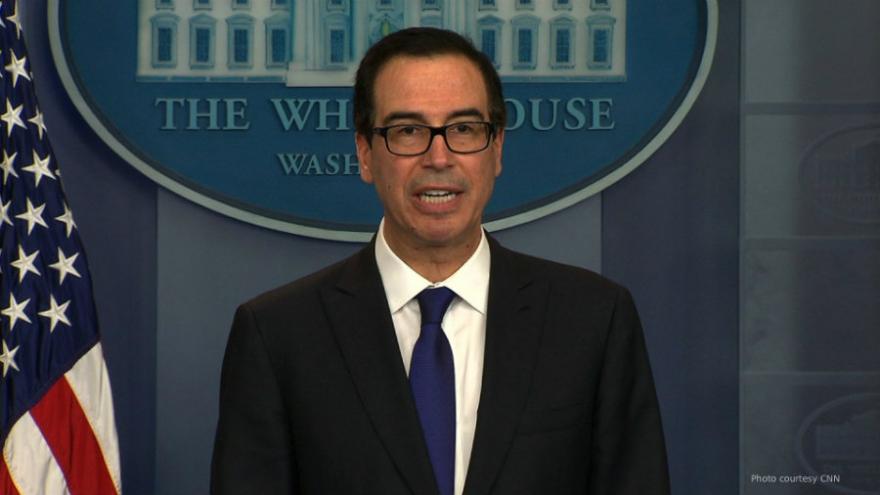 (CNN) -- Treasury Secretary Steve Mnuchin said Friday that he is "100% confident" that the government will raise the federal debt ceiling, a day after President Donald Trump publicly criticized the Republican-led Congress via Twitter for not having accomplished it already.

Congress has until the end of September to either raise the debt limit or default. The latter scenario would mean the government, which is spending more money than it takes in, would not be able to borrow the money it needs to pay all its bills.

If the government were to default on its legal obligations, markets and the economy likely would suffer.

Mnuchin said he sees "no scenario" in which the United States would fail to make its payments.

On Twitter, Trump called out Congress on Thursday for not attaching debt-ceiling legislation to a Department of Veterans Affairs bill that passed.

"I requested that Mitch M & Paul R tie the Debt Ceiling legislation into the popular V.A. Bill (which just passed) for easy approval. They didn't do it so now we have a big deal with Dems holding them up (as usual) on Debt Ceiling approval. Could have been so easy-now a mess!" he wrote in two tweets.

Mnuchin confirmed Trump wanted to tie the two bills together, but said it was in the hopes that Congress would not need to tackle the debt limit issue in September.

The treasury secretary said he has been in communication with congressional leaders.

"The government intends to pay its debts and the debt ceiling will be raised," Mnuchin said.