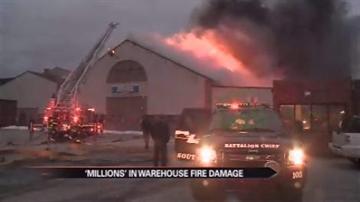 MISHAWAKA, Ind. --  It has been over twenty-four hours, since flames ripped through the old R.M.G. factory building in Mishawaka.

“Size wise as far as the footprint and the square-footage goes—this is the largest one," said Mishawaka Fire Batallion Chief Jim Cocquit.

The closed factory turned warehouse housed everything from classic cars to huge boats.  Starboard Choice Marine, who stores boats at the facility sent out a press release addressing the fire.

"At this time, we are searching for answers as to what happened to cause such devastation," said Starboard Choice Marine.

“As far as the cause and origin we are quite a few days from figuring out anything on that," said Cocquit.

But when I went to the MIshawaka Police Department to dig deeper, instead of finding answers I had more questions.

According to the police log, officers arrested 59-year-old Robert Throwbridge for tresspassing in the building the night of the fire.

“There was someone who was trying to go in, a civilian, and eventually the cops escorted him away," said Cocquit.

I tracked down that civilian and talked with him on the telephone and although he did not want to go on camera, he did tell me he was the only one in the building when the fire started.

He says he was taking pictures of some of his belongings when the fire started and he says he called 9-1-1 four times.

Throwbridge says he was actually in and out of the building several times trying to save his belongings when police finally escorted him off the property and arrested him for tresspassing.

Chief Cocquit says he isn't sure if the fire was suspiscious or electrical, but he doesn't know why anyone one would put their life on the line for material goods.

“I had some belongings that I lost in the building too…and you think of that but at the end of the day…they are just belongings," said Cocquit.

I did ask the Mishawaka Police Department to see if the police report for Throwbridge's arrest, but they told me they could not give that information out because the prosecutor has not filed formal charges yet.