More than 1 in 3 voters expected to vote early 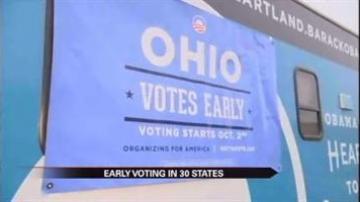 Election Day is just a couple of weeks away but Americans are already staring to vote in 30 states.

More than one in three voters, which is nearly 46 million people, are expected to cast their ballot early.

They can vote in person, by mail or absentee ballot.

Locking down support early will help campaigns build momentum and allow for better focus on their late game voter outreach and on the true undecided.

The presidential race will be won or lost in a handful of the battleground states and right now there is some type of early voting going on in all of them.