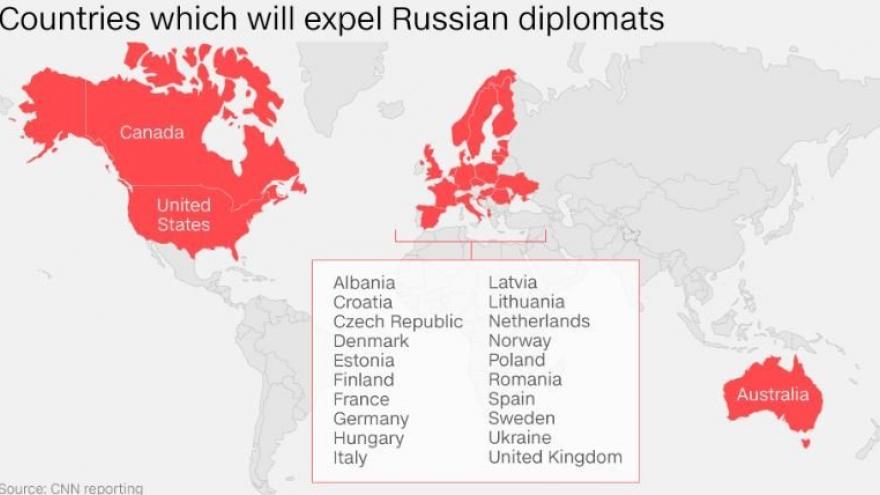 (CNN) -- Russia ordered the expulsion of diplomats from at least 23 countries Friday, as a reciprocal move after those countries expelled Russian diplomats in solidarity with the United Kingdom over the poisoning of a former Russian double agent.

More than 20 countries announced this week that they would expel Russian diplomats in support of Britain, which blames Moscow for the March 4 nerve agent attack against Sergei Skripal and his daughter, Yulia Skripal, on British soil. Russia denies involvement.

Also expelled are one Finn, one Latvian, one Swede, one Norwegian, one Romanian, one Croatian and one Irish diplomat, as well as an Estonian military attache.

Moscow reserved the right to respond to Belgium, Hungary, Montenegro and Georgia with regard to their actions over the Skripal case, Sputnik said.

"This message from Moscow is not surprising," German Foreign Minister Heiko Maas said in response to the expulsion of German envoys. "We had not taken the decision to expel the Russian diplomats lightly. Our reaction in the case of Skripal was necessary and appropriate as a political signal."

Maas said the decision was made in solidarity with Britain and because Russia had "refused to give any clarification" on the matter. "Nevertheless, even in the current situation, we remain committed to dialogue with Russia and will work for European security and a constructive future for relations between our countries," he said.

Russia's state-run Tass news agency reported that Russia had also demanded that Britain reduce the number of staff in its Moscow embassy to match the number of Russian diplomats remaining in London.

UK Prime Minister Theresa May ordered the expulsion of 23 Russian diplomats on March 14, describing them as "undeclared intelligence officers." Russia in turn ordered 23 British diplomats to leave Moscow and closed the UK Consulate in St. Petersburg.

News of the latest round of expulsions came after Russia's Foreign Ministry on Friday summoned the ambassadors of countries it described as taking "unfriendly actions" against Russia in solidarity with Britain.

Russia's Foreign Ministry said the ambassadors would be "handed notes of protest and informed of Russia's reciprocal measures."

Foreign Minister Sergey Lavrov warned earlier this week that Russia would retaliate over the mass expulsion of its diplomats by other countries, including many EU states, which he blamed on "colossal pressure and colossal blackmail" by the United States.

But Kremlin spokesman Dmitry Peskov said Friday during a regular call with reporters that Russia had been "forced" to expel the US diplomats and was "never the initiator" of tit-for-tat sanctions.

"Russia did not unleash any diplomatic wars. President (Vladimir) Putin was and remains a supporter of establishing and developing good relations with all countries from the very beginning, including the United States," Peskov said.

"You know that Russia was forced to take retaliatory steps in response to those unfriendly, nonconstructive and unlawful actions, in this case, related to the expulsion of our diplomats and the closure of the consular post," he said, in reference to the US moves.

After the Russian government announced the expulsion of US diplomats, US State Department spokeswoman Heather Nauert said that Moscow "should not be acting like a victim" and that the only victims in this matter were the Skripals and other people affected in the English city of Salisbury.

She added that it was clear the Russian government was "not interested in a dialogue on issues that matter to our two countries."

The UK hospital treating the Skripals said Thursday that Yulia Skripal, 33, was "improving rapidly" and that she was no longer in a critical condition.

"I'm pleased to be able to report an improvement in the condition of Yulia Skripal. She has responded well to treatment but continues to receive expert clinical care 24 hours a day," Dr. Christine Blanshard, medical director for Salisbury District Hospital, said in a statement.

Sergei Skripal, 66, remains in a critical but stable condition, the hospital said.

UK police said this week they believed the Skripals first came into contact with the nerve agent at Sergei Skripal's home in Salisbury.