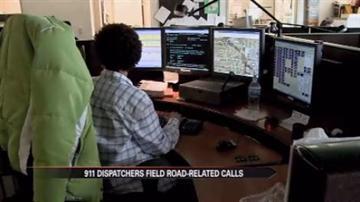 BERRIEN COUNTY, Mich. -- Although road conditions improved during the day Wednesday, freezing temperatures could create a more dangerous situation on the roads.

Tuesday afternoon and evening, more than two thirds of the calls to Berrien County dispatch were weather and road related.

"About 62 percent of our calls, just yesterday between 2 and 8 were related to accidents with the weather. So it was kind of controlled chaos in here,” said Kaitlin Sampsell, shift supervisor for Berrien County 911 dispatch.

During the peak hours of Tuesday night's winter storm, the Berrien County dispatch center received 146 calls. 89 of those were related to slide offs and accidents.

Unlike other storms this year, no Michigan highways were shut down.

"This year has actually been pretty heavy in accidents and, like you said, we've had to shut down the highways a number of times already this year and it's pretty much because of the typical Michigan winters, it warms up and then gets cold again,” said Sampsell.

Sampsell says the road closures are usually due to pile ups and multi-car accidents caused by black ice and drivers who misjudged the roads as dry.

For Sampsell and her staff, this job has taught them just how unpredictable the road conditions can be.

"Well out of anybody I guess we know we have to go slow, so we are in no rush to get home when we leave here. We tell everyone who's leaving, go slow. We don't want to hear from you,” said Sampsell.