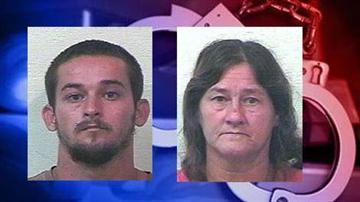 VAN BUREN COUNTY, Mich. –- A man and his mother were arrested and charged with torture and first degree child abuse for allegedly abusing an 11-year-old.

The Van Buren County Sheriff's Office responded to a call that an 11-year-old-boy was walking down the street alone early Wednesday morning.

He told deputies he was running away because he was physically abused.

Child Protective Services stepped in and the boy and another child were removed from the home.

Deputies arrested 28-year-old Randall Hamilton and his 46-year-old mother Peggy Hamilton. They were each charged with one count of torture and one count of first degree child abuse.

According to deputies, the 11-year-old was nailed to the floor of the home with plubmber's tape and he was unable to move for hours at a time. He was also extremely malnourished.

Hamilton is the boyfriend of the child's mother.