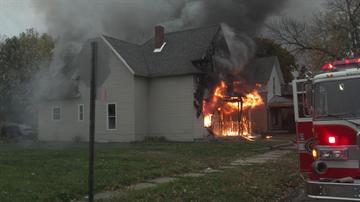 SOUTH BEND, Ind. -- Fire officials are still investigating a house fire that left a mother, two young boys, and their two puppies trapped inside. It happened on South Bend's w est side, on the corner of Harrison and Lindsey Streets.

One boy actually jumped out the second story window into the arms of a young man who was in the right place at the right time.

Eric Johnson was visiting a friend when he saw heavy smoke and flames coming from the house just across the street.

"I heard her yelling help, help, help and her son was on the roof".

Johnson says his first thought went to the kids. He knew small children lived in the house, which is why he immediately ran over to help -- fearing more kids could be trapped inside.

"I have kids of my own and I could see myself and my kids in the situation and I don't know what I would do".

Without hesitation Johnson talked the 4-year-old boy into jumping into arms from the second story window. Seconds later he was climbing up onto the roof to help the mother and her youngest, a 3-year-old boy, get down to safety.

Moments later firefighters arrived and immediately began searching for more family members who they thought may have still been trapped inside.

Despite their best efforts, firefighters say they were unable to save the two puppies that were also inside the home. As painful as it is to lose a family pet, Johnson says he is happy knowing no one else was hurt.

"Ya know they just have to start over as a family, they've got each other".

Firefighters say most of the heavy fire was on the first floor, but since the damage was so great they still do not know what caused it.

"There is so much heavy fire that it's going to take a while to find out how it started," says Maenhout.

Investigators were at the house until late tonight sifting through the rumble, including an arson investigator that was called to home just before 7 p.m., but fire officials are not saying whether they are treating this as a suspicious fire.