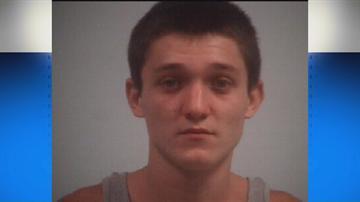 ELKHART, Ind. – The mother of 18-year-old Brandon Johnston, who is accused of murdering 69-year-old convicted sex offender James Grant, aka Tyrannosaurus Rex Mullens, defended her son on Tuesday saying he acted in self-defense.

Mullens, who was convicted of sexual misconduct with a minor in 1996, was found stabbed to death in his home on the 1700-block of Morton Ave. on Aug. 4.  The Elkhart County Prosecutor’s Office announced the arrest of Johnston on Monday.  Johnston’s mother believes Mullens was a predator who targeted her son for years.

Jessica Dills, Johnston’s Mother, said she, son and her parents lived on Morton Ave. for years and Mullens moved in about five years ago.  Dills claimed that nobody in the neighborhood was notified that Mullens was a sex offender and only found out after they grew concerned about Mullens’ behavior.

"He tried to buy my parents gifts, he tried to buy us stuff because he always tried to get a hold of Brandon. He would call and ask where my son was,” Dills described.  “He even showed up at our house before. He showed up at my parent's house. It was just creepy."

Dills claimed she and others made numerous formal complaints and reports to the Elkhart Police Department about Mullens’ behavior, saying that he often had contact with the numerous children in the neighborhood.

Eight months ago Dills moved to her current home in Three Rivers, Michigan, in part to get away from Mullens.  However, her parents (Brandon Johnston’s grandparents) remained at their home near Mullens and her son often stayed with them.  Johnston was staying with his grandparents when Mullens was murdered and has told his mother that Mullens had gotten him drunk on the night of the murder, but he can’t remember much of what happened.

"I don't know if he slipped something into the drink that he gave my son and that's why my son can't remember some of it, it knocked him out and then he woke up and that's when everything happened,” Dills claimed.  “My son tried to get it to stop and he (Mullens) was hitting my son with an object, and my son said, ‘I had to defend myself.’"

Brandon Johnston is in the Elkhart County Jail awaiting trial.

"I saw him by myself and when he started crying I just started to lose it. It's not easy to see your kid there," Dill described. "The rest of his life, it's going to haunt him. It's going to haunt us. He wanted to join the Army. That's never going to happen. So much is going to be taken away from him just because of this.”

Dills said she believes police should have done more to investigate Mullens before his murder and that the case should serve as a reason for stricter rules about where sex offenders should be allowed to live.

“I’m not saying he (Mullens) didn’t have a right to live anywhere, but in amongst a general population with tons of kids, that wasn’t right,” she said.  “I don’t want this to ever happen again. This shouldn’t have happened this time.”

Brandon Johnston is scheduled to be in court for an initial hearing on Aug. 23.