Mother poisons own family with anti-freeze 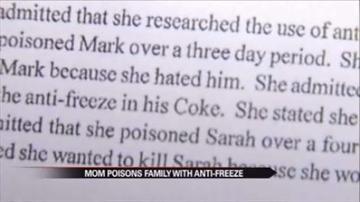 SPRINGFIELD, Mo. — A mother has been charged with killing her husband, son and attempting to kill her daughter by poisoning them with anti-freeze.

The 51-year-old initially denied any involvement, but later admitted she killed her husband because she "hated" him," killed her son because he was "worse than a pest," and tried to kill her daughter because she had student loans and didn't have a job.

"They brought a body bag out on a stretcher," said neighbor Doug Standfill. "We didn't know what happened or who it was or anything like that and we never heard anything."

If convicted, the mom could face life in prison without parole or the death penalty.