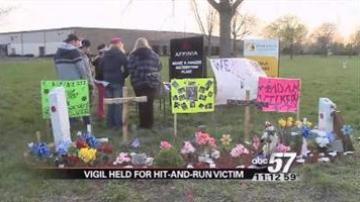 MISHAWAKA, Ind-  “He thinks he got away with murder," said mother Deanna Trivett.

Adam Vicker’s mother wept tears of sadness and anger at the vigil Tuesday night on 12th Street where her son and the adult who was walking him home, 43-year-old Dennis Evans, were killed.

Adam’s mother Deanna Trivett said she couldn’t believe when her daughter saw on her Facebook the man found guilty for her son’s death, James Krueger was out partying.

Trivett wants to know why Krueger is out early.

“He wasn’t supposed to be out until September of this year, but he has been out since 2010 and we were never notified," said Trivett.

So she has been calling the prosecutor’s office, but has heard nothing.

“No answer; not one answer," said Trivett.

Adding insult to injury, she says the judge ordered Krueger to pay the family $50,000 for her son’s hospital bills, but she hasn’t seen a dime.

Trivett says she may have lost her son, but she hopes this vigil tonight will keep his memory alive and she won’t lose the fight for his justice.