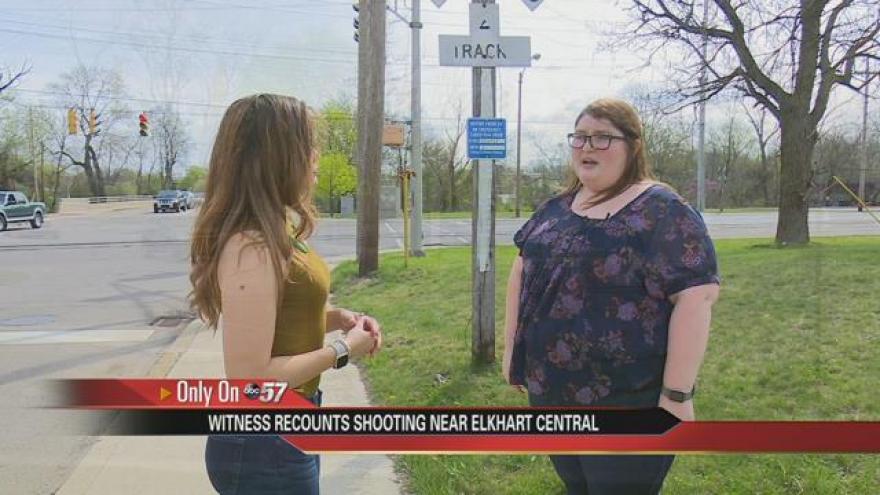 A shooting right by Elkhart Central High School has parents concerned about the safety of their children.

ABC57 exclusively talked to a mother who saw it all unfold.

“He was about right here, and started shooting and running like this; my car was right next to him,” explained Andrea Yeager.

Yeager, mother of a student at Central High, says she was at a red light seconds before she saw someone fire shots.

“He whipped a gun out of his bag, threw his backpack on the ground and started briskly walking across the street,” she said.

On Tuesday, it was Yeager’s first time calling 911.

”I fumbled trying to get my phone out to take a picture of him as soon as possible, but he took off running.”

According to Elkhart PD just before 3 o’clock, officers were called out to the 400 block of Waterfall Drive, right near Central High.

A 15-year-old boy was walking when he heard someone yell his name. Police say he turned and saw two people he knew, then for some reason, one of the shot in his direction.

“I feel like it was targeted. He was briskly walking toward the kid, shooting,” said Yeager.

The teen wasn’t hit. Another witness who was inside Dr. J Snyder’s dentistry across the street, remained anonymous and off camera but heard the gunshots, too.

Yeager says it’ll never be the same driving down this road again.