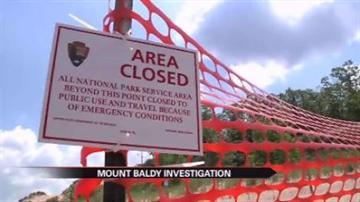 Mount Baldy at the Indiana Dunes is closed indefinitely while parks employees investigate how a sinkhole formed and swallowed up a 6-year-old boy. They want to make sure it is safe before it is reopened.

Rowe says they're working to gather more information on how a decomposed tree may have created a sinkhole that swallowed up 6-year-old Nathan Woessner Friday.

Park rangers are keeping a close eye on the locked grounds.

"Right now Mt. Baldy is closed indefinitely because we truly don't know how long this is going to take. The equipment is not nearby that we know of. It certainly exists regionally and nationally we don't know exactly when it will be in,” said Rowe.

Rowe says if you want to come out and enjoy the dunes, you should feel safe.

"Right now we believe that Mount Baldy is the only area that has this potential danger because it's a more rapidly moving dune,” said Rowe.

Rowe said they have about 12 people in the parks department working on this investigation.

They're meeting next Thursday to share what everyone has learned and to figure out what’s next.