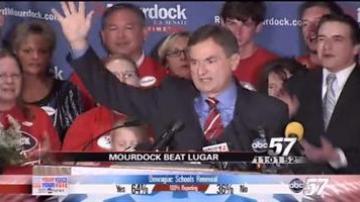 A bitter battle and a historic loss for the longest serving congressman in Indiana history -- Senator Dick Lugar is out.

Lugar is the Senate's most senior Republican and longest serving member of Congress in the state's history.

His lengthy service record didn't seem to mean much to Primary voters.

Both candidates spent a lot of money on their campaigns.

But in the end, it wasn't even close. Mourdock took nearly 60 percent of the vote.

Lugar addressed his supporters in his first concession speech in decades, and said it's time to move forward.

"I cherish the confidence that each of you placed in me and I urge you to join me [with] determination to continue to serve our country and our state. God Bless each of you and God Bless America," said Lugar.

At Mourdock's victory party, he kicked off his campaign against Joe Donnelly, thanked his wife and many supporters.

"The truth is, this is hard stuff. Hundreds of people have come up to me over the past few months and said the words I appreciate more than 'I will vote for you'.  They are, 'I will pray for you,'" said Mourdock.

He went on to say "It is time," and that he hopes to move the Senate in a more Conservative direction.

He added that he hopes to move the country to a better place.

Mourdock will be taking on South Bend Congressman Joe Donnelly.