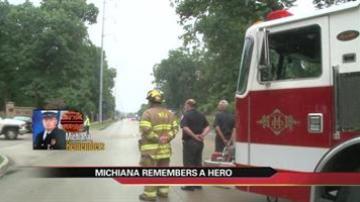 He was killed while fighting a fire at K-Fex in New Carlisle Tuesday evening.

Many people stood with their hands over their hearts, others with their heads bowed as Middlebrook passed by on engine 91.

"It's like you lost a family member," said Frick.

The procession was a somber reminder of the dangers of the work.

"A lot of guys get injured. Some seriously. Some make the ultimate sacrifice," said Frick.

He watched as Middlebrook was escorted to his final destination.

Others, like Brian White, took the opportunity to teach his children a life lesson.

"I just want them to realize what firefighters do on an everyday basis,' said White.

He didn't have to force them to pay their respects. His 13-year old daughter Bianca says she wanted to do it.

"He fought for our community and it's important to come out here and show respect," said Bianca.

Young and old alike were touched by the loss and the sacrifice.