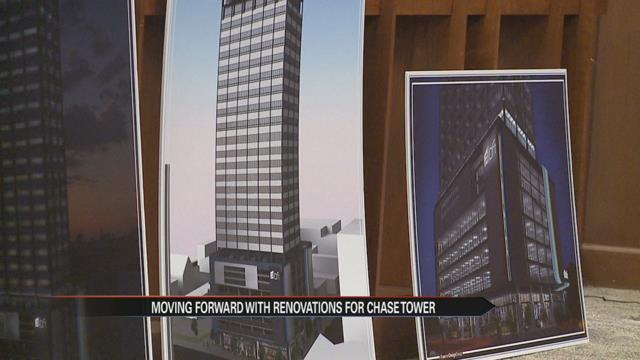 The new owners of the Chase Tower are asking the city of South Bend for tax abatements for the $30 million project. The new Aloft hotel would open by 2017.

With the DoubleTree Hilton, right next to the old Chase Tower, strong hotel competition could be very likely in the coming years.

But Robert Kraemer, the principal of Kraemer Design Group which is leading the multi-million redesign of the Chase Tower, says the Aloft hotel and Double tree are too different to be each other’s competitors.

“What typically happens is if the DoubleTree is full then that type of property will send guests to this and vice versa so it tends to work out really well,” says Kraemer.

Where the Aloft is a mid service hotel, the DoubleTree is a full service hotel with differences ranging from the amount of restaurants and ball room space, says Kraemer.

Aloft will be subdivided into four marketable sections which include the residential portion, the hotel, the commercial space and the parking garage.

When Kraemer came to the site 6 months ago to begin the investigation of the old Chase Tower, he discovered the parking garage represented a much bigger problem throughout the entire building

“The parking deck itself was in severe disrepair, true structural issues similar to what you see when salts eat away at concrete and supporting steel so it was kind of a big change in direction there, very quickly we just discovered that essentially a majority of the facility had reached it useful life,” said Kraemer.

Kraemer also says, however, that one of the building’s biggest assets was that it had two full commercial kitchens that could be used for destination restaurants, like The Cheesecake Factory.