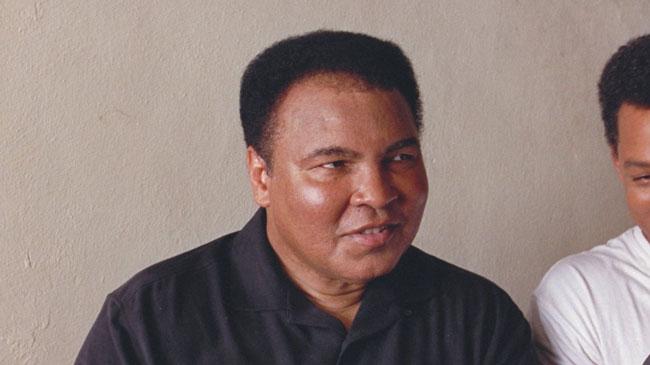 (CNN) -- For a man who preached inclusiveness and reached millions around the world, it's a fitting way to let his fans say goodbye.

Muhammad Ali's funeral and jenazah -- or Muslim funeral prayer service -- will both be open to the public, his spokesman Bob Gunnell said.

And one of the venues will be the site of Ali's last hometown fight in Louisville, Kentucky.

The jenazah will take place at noon Thursday at Freedom Hall -- where Ali defeated Willi Besmanoff on November 29, 1961.

All faiths are welcome at the jenazah.

"Ali spoke of inclusiveness his entire life," Gunnell said. "We want this to be inclusive of everyone."

The final public goodbye will come Friday, with Ali's funeral.

His body will be driven through the streets of Louisville, the city where the three-time heavyweight champion grew up and began his amateur career at age 12.

The funeral will take place at 2 p.m. Friday at the KFC Yum! Center -- a 22,000-seat basketball arena in Louisville.

Those who can't make it inside the arena can watch the funeral streamed live on the website for the Muhammad Ali Center.

Gunnell said details on attending the jenazah and funeral will be released later Monday.

After the funeral, Ali will be interred at Cave Hill Cemetery.

The world mourned Ali's death on Friday night at age 74, the result of septic shock due to unspecified natural causes.

Ali's family members knew the icon did not belong to them alone.

"He belonged to the world," Hana Ali told CNN in her first interview after her father's death. "And I'm OK with that."

The immediate family will have a private gathering Thursday.

"Muhammad Ali was truly the people's champion, and the celebration will reflect his devotion to people of all races, religions and backgrounds," the family said in a statement.

"Muhammad's extraordinary boxing career only encompassed half of his life. The other half was committed to sharing a message of peace and inclusion with the world. Following his wishes, his funeral will reflect those principles, and be a celebration open to everyone."

It's the way her father would have wanted it, Hana Ali said. He may have even foreseen it.

She recounted a recurring dream he would describe of walking down the street in Louisville surrounded by chants and cheers. Then, all of a sudden, he takes off flying.

'You can go back to God now'

The boxing great had been at HonorHealth Scottsdale Osborn Medical Center in Scottsdale, Arizona, with what Gunnell initially described as a respiratory issue.

"I know it sounds crazy, but I think we all just thought Daddy would defy the odds of even death," Hana Ali said. "He just seemed to always fight through everything."

He spent his final hours surrounded by children and grandchildren, she said. They took turns holding his hands, hugging and kissing him, and whispering in his ear.

"It was beautiful," she said, sobbing. "He was at peace."

Throngs of fans have descended on Louisville to pay their respects and learn more about Ali's hometown.

People started lining up at 2 a.m. Saturday to see his childhood home on Grand Avenue, which opened as a museum in early May.

The flood of interest in Louisville prompted the city to create a website -- AliLouisville.com. It guides fans to landmarks inspired by Ali and describes the icon's impact on the community.

The city will celebrate the legend Wednesday with a free "I Am Ali" festival featuring music and other live entertainment. Children can write on a wall and describe what they want to be "the greatest" in.

President Barack Obama and first lady Michelle Obama were among those who mourned Ali's passing.

Don King, the boxing promoter every bit as brash as Ali, told CNN that in his mind Ali will never die.

"His spirit will go on forever," he said. "He's just a great human being, a champion of the people, the greatest of all time."

Even as the former champ battled Parkinson's disease for his final 32 years, he had the same love for life and people, King said. Parkinson's, which primarily affects a patient's movement, is a "progressive disorder of the nervous system," according to the Mayo Clinic.

Hours before her famed father passed away, Laila Ali, herself a former world champion boxer, posted a photo of Ali with her daughter, Sydney, who was born in 2011, and thanked the public for their support.

George Foreman, whom Ali defeated in 1974 for the world heavyweight title, wrote on Twitter, "It's been said it was rope a dope Ali beat me with. (N)o (it was) his beauty that beat me. Most beauty I've know(n). loved him."

Mike Tyson, the youngest heavyweight champion in history, said, "God came for his champion. So long great one."

Career spurred by a police officer

Ali was born in January 1942 as Cassius Clay. He began boxing as an amateur after his bicycle was stolen and a police officer offered to train him. Clay won a gold medal as a light heavyweight at the 1960 Olympics, then turned pro, fighting his first bout in his hometown.

In 1964 he became heavyweight champion (the youngest ever at the time) with a surprising knockout of Sonny Liston. That year he joined the Nation of Islam and changed his name.

Ali's sparkling career was interrupted for 3½ years in the 1960s when he refused induction into the U.S. Army during the Vietnam War and was convicted of draft evasion. The Supreme Court overturned the conviction.

Ali was prepared to go to prison, King said. "He'd rather go to jail than break what he believed in."

During his boxing hiatus, Ali spoke frequently about racism in America.

"At a time when blacks who spoke up about injustice were labeled uppity and often arrested under one pretext or another, Muhammad willingly sacrificed the best years of his career to stand tall and fight for what he believed was right," said NBA legend Kareem Abdul-Jabbar, who called Ali a friend and a mentor.

"In doing so, he made all Americans, black and white, stand taller. I may be 7'2" but I never felt taller than when standing in his shadow."

Ali went on to win the heavyweight title twice more before retiring for good in 1981 with a record of 56-5.

In an interview with CNN, Ali's brother Rahman Ali said he was sad because "I won't see my brother in the flesh anymore. It's traumatic, I can't see him anymore. Consolation is that I'll see him in heaven."

The brother recalled his last words to Ali in a phone conversation: "'I will see you tomorrow, Champ. Take care of yourself.'"

Meanwhile, outside the center, some 15,000 bees swarmed a tree across the street next to a mural featuring Ali and his famous quote, "float like a butterfly, sting like a bee."

A beekeeper who was called out to the site called it an "exceptional coincidence."

"Swarms happen all the time in Louisville, and everywhere, in May and June when bees reproduce," backyard beekeeper Kevin McKinney said.

"This swarm just happened to land in a tree next to the Muhammad Ali Center and the mural that says, 'float like a butterfly, sting like a bee.' "

However, Donald Lassere, president and CEO of the Muhammad Ali Center, had a more cosmic interpretation.

"The Muhammad Ali Center has always experienced what we have come to know as, 'Muhammad Magic,' but I cannot even conceive as to the genesis of those bees," Lassere said.

"It's possible his spirit is watching over the center, and he is wanting his fans to know that he is still 'floating like a butterfly and stinging like a bee.'"

The boxing champ had already addressed how he wanted the world to think about him after his death.

In his book "The Soul of a Butterfly: Reflections on Life's Journey," Ali said he wanted to be remembered as "a man who won the heavyweight title three times, who was humorous, and who treated everyone right. As a man who never looked down on those who looked up to him, and who helped as many people as he could. As a man who stood up for his beliefs no matter what. As a man who tried to unite all humankind through faith and love."

He added, " And if all that's too much, then I guess I'd settle for being remembered only as a great boxer who became a leader and a champion of his people, and I wouldn't even mind if folks forgot how pretty I was."

"My father would be so happy right now, so blessed that people are honoring him the way they are," his daughter said.

He loved being the center of attention and the object of news reports, even if in recent years it was for being hospitalized, she said.

"He knew and loved his importance to the world," she said, but he also asked his children if people still remembered him.

"He was his own biggest fan, but he really was humble," she said. "A beautiful contradiction."