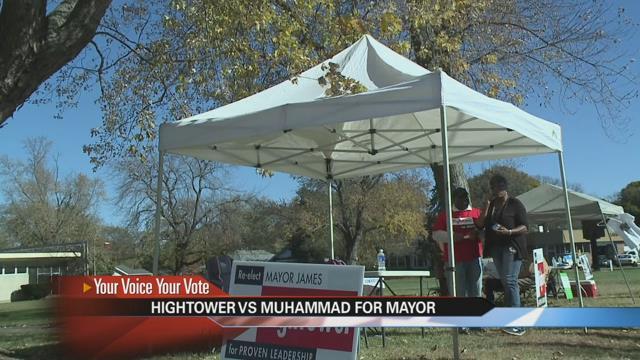 Hightower's campaign office was busy on Tuesday with people who were making signs and rallying for his re-election.

If he stays in office, Hightower said he will start his term by making strategic planning goals.

Hightower said, “Number one is our water rates. How are we going to reduce that or how we going to change that? Number two, infrastructure, taking care of roads. Not just the main streets but the internal local streets. We need more funding from the state.”

Hightower said, “In fact we’ve done more ribbon cuttings on businesses in this community in the past three years than in the past 10 years. We did a ribbon cutting yesterday right across the street for a tailoring businesses which is in the process of putting together a training program!”

Commissioner Muhammad talked about his future goals if he is elected.

Muhammad said, “In the first 100 days I plan on having the town hall meetings in each ward so I can sit and listen and hear some of the immediate projects the residents would like to see take place. I also plan to meet with the business district.”

Along with making Benton Harbor business-friendly, Muhammad said if he is elected he would focus on making the schools and neighborhoods safer.

According to the Berrien County clerk, at 11 a.m. only 3% of voters in Benton Harbor came out to vote for the mayoral and commissioner elections.

Polls in Michigan closed at 8 p.m.

UPDATE: Marcus Muhammad was elected Mayor. He posted on his Facebook page that he was humbled and honored.