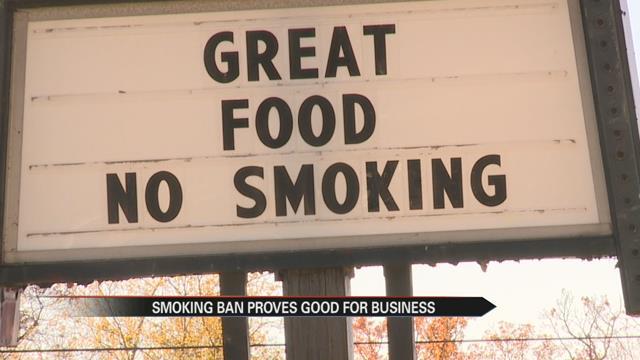 Popular bar and restaurant Mulligan's decided to go smoke free early back in August, after the city's smoking ordinance. Now the owner says that new rule has helped his business grow.

The ordinance for all businesses doesn't take effect until January. But as we reported back in August, Mulligan's got a head start.

Owner Patrick Mulligan says they are getting more diners than ever before on non-football game days. So much more, that he's had to hire a couple more cooks to handle the influx of orders.

Patrick says he strongly opposed the smoking ordinance at first. But it's working out better than he expected.

"We were skeptical and scared at first," said Patrick Mulligan. "We've got a lot of bright faces that come into our establishment. We are selling food. When you come to Mulligans you're a stranger but once"

It has been a contentious issue with small business owners in the area. Many fear that the city's smoking ordinance would hurt their business.

Mulligan said he understands the fear of small business owners who don't have the financial support of a chain like Brothers or Buffalo Wild Wings. But he thinks they will like the results.

"I didn't think it was reasonable for anyone to tell me what to do," said Mulligan. "However I think there is only 17 states left that smoke. So we are moving forward and it's paying off for us."

Mulligans is celebrating their new success with a party Monday at 5pm. The public is welcome to attend.