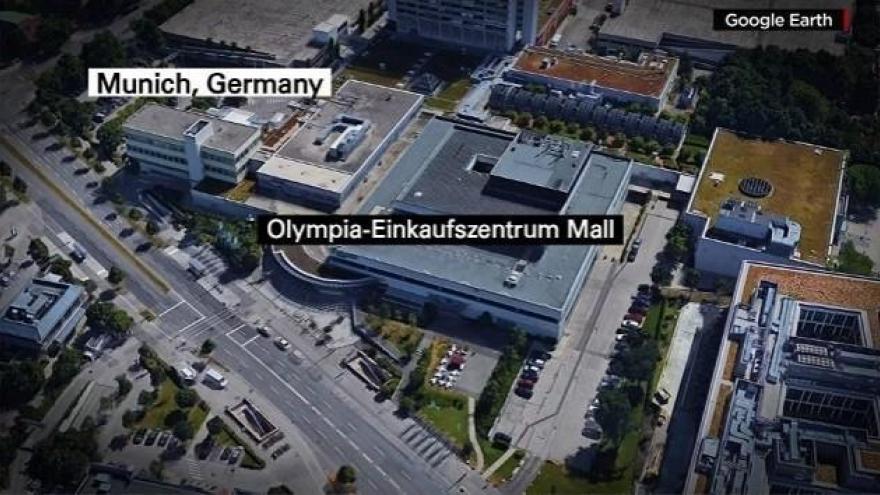 Although police had engaged in a shootout with the Munich gunman, an autopsy indicated he had died of a self-inflicted gunshot wound, police officials told a press conference in Munich on Saturday.

No suicide note had been found in the attacker's home, nor was there any reference to religion found in the documents recovered by investigators, officials said.

The attacker's parents were in too much of a state of shock to help police in their investigations, officials said. Police also revealed that the attacker had been a victim of "bodily harm" in an incident that involved other young people in 2012.

Police investigating the Munich shooting rampage say that there is an "obvious" link with Anders Behring Breivik's massacre in Norway, which was carried out exactly five years to the day before Friday's attacks.

Besides the date, investigators pointed to several other connections, such as the young age of the victims, and the fact the attacker extensively researched "rampages" or mass shootings.

Breivik, a far-right terrorist, killed 77 people in attacks in 2011.

The Munich attacker was an 18-year-old student who was born and raised in the city, Munich Police Chief Hubertus Andrae said at a press conference Saturday.

He said the gunman was "not connected with refugees at all." The gunman had received medical treatment for mental issues, a police official said, and investigators are still looking into his mental condition.

The Munich gunman used a 9-mm Glock 17 pistol that was likely obtained illegally, because the serial number had been scratched off, police told journalists in Munich on Saturday. The gunman was found armed with about 300 bullets.

A total of 10 people died in the shooting, including the gunman who killed himself.

Investigations into the Munich shooting indicate that the gunman may have made a Facebook post falsely claiming that the McDonald's where the attack took place was offering discounts, said Robert Heimberger, president of the Bavarian State Criminal Police Office. "We need to verify this, but we believe it may be done by this perpetrator," he told journalists.

The investigation into the Munich shooting rampage so far indicates that there was no political motivation for the attack, Munich prosecutor Thomas Steinkraus-Koch said Saturday.

Police searching the Munich gunman's family apartment found evidence in his room that he had been researching shooting rampages, including a book entitled "Rampage in My Mind -- Why Students Kill," said Robert Heimberger, president of the Bavarian State Criminal Police Office.

Police have searched the bedroom of the 18-year-old gunman who killed nine people in Munich on Friday and found documents about going on a rampage, Munich Police Chief Hubertus Andrae told journalists. There were no indications the attacker had a connection to ISIS, he said.

A teenage gunman killed nine people in a shooting rampage at a shopping district in southern Germany -- before police found his body on a nearby street, authorities said.

The 18-year-old stormed a McDonald's outside the Olympia mall in Munich on Friday evening, police Chief Hubertus Andrae said.

The shooting in the nation's third-largest city left 16 others wounded, with children among the casualties.

Police put the city on lockdown and and halted public transportation.

Shortly after, surveillance video and witness statements concluded it was one attacker, according to the police chief. He said the gunman was found dead of a self-inflicted gunshot wound.

Special police forces searched an apartment in the Munich neighborhood of Maxvorstadt on Saturday morning, apparently in connection with the shootings, residents told CNN.

A witness who was in the restaurant said her son was in the bathroom with the gunman.

"That's where he loaded his weapon," said Lauretta, who only wanted to be identified by her first name.

She said she saw many children casualties.

"I hear like an alarm and boom, boom, boom ... and he's still killing the children. The children were sitting to eat. They can't run."

Lauretta said she heard the gunman say, "Allahu Akbar," or "God is great" in Arabic.

"I know this because I'm Muslim. I hear this and I only cry," she said.

Witness Huseyin Bayri said he was riding his bike outside the restaurant when he saw the attacker yelling.

Bayri jumped off his bike, crawled toward the wounded teenager and hid next to him. He tried to reassure him as he pressed on his gunshot wounds to stop the bleeding.

"The boy asked for my help. I tried to talk with him, asked him his name, his age, if he has a girlfriend," Bayri said. "I tried to make sure that he looked at me, that his eyes are open."

The teen pleaded with Bayri to call an ambulance, but died just before it got there.

From eatery to mall

After the shooting, the gunman moved across the street to the mall, which is near the site of the 1972 Summer Olympics where Israeli athletes were killed by Palestinian attackers.

Lynn Stein, who works in the mall, described a chaotic scene when gunfire erupted.

She saw someone lying on the floor of a store who appeared to be either dead or injured.

"There's a woman over them, crying," she said.

Photos and video posted on social media showed a profanity-filled verbal exchange between a man on the top level of a parking garage and another one on a balcony.

The exchange, recorded on two camera phones, captured an intense conversation that ends in gunfire. The man who appears to be a shooter said insulting things about Turks, did not espouse jihadist ideology and spoke with a German accent.

While police did not identify the shooter, they said it was an 18-year-old German-Iranian who had lived in Munich for at least two years.

He was unknown to police and his motives are unclear, authorities said. No group has claimed responsibility.

"We have to investigate everything via third person as we cannot question the perpetrator now," Andrae said.

Europe has been on high alert following a recent spate of terror attacks.

This week, a teenager who said he was inspired by ISIS stabbed passengers on a German train before police shot him dead.

In France, a man killed 84 people last week when he drove a large truck through a crowd celebrating Bastille Day in Nice.