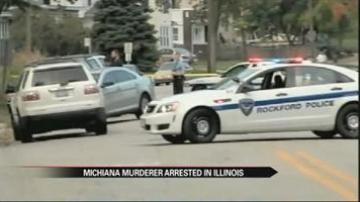 SOUTH BEND, Ind. -- After several days of being on the run, a man suspected in a fatal shooting  in South Bend is finally in custody. The search started in South Bend and led to Rockford, Illinois.

"Well I'm feeling really bad and really frightened and I just want him to come out of the house so he won't get hurt," said Alice Jefferson, Anthony's stepmother.

The search for murder suspect Anthony "Bones" Jefferson started on South Bend's northwest side and ended a couple days later after a four hour standoff at his stepmother's house in Rockford, Illinois.

Not even a mother's love could save Jefferson from the laundry list of charges he faces.

Police say Anthony robbed a woman at a bank on Main Street and then forced her to drive him to another location.

Then he entered this 7-Eleven and threw coffee in the cashier's face and demanded the contents of her drawer.

A quick check on nearby family members led police to Rockford, 200 miles away.

The SWAT team staked out the home for four hours and tried coaxing Anthony to come outside.

But once it became clear he wasn't budging, they made the move.

"As an entry was made a flash bang was thrown into the basement as the SWAT team made an entry in the basement," said Dominic Iasparro, Deputy Chief of the Winnebago County Sheriff's Department.

Neighbors on the street where it all began say they're finally at ease.

"Everybody in the neighborhood has felt unsure, uneasy uncomfortable," said Doc Rushing.

Rushing says he's followed the story since it all unfolded outside his front door.

"I feel and my wife feels relieved that the bad guy is in custody," said Rushing.

Anthony is in the Winnebago County Jail.

He appeared in court Friday morning and declined to waive extradition to St. Joseph County, Indiana.

The prosecution's office now must pursue a warrant for extradition.