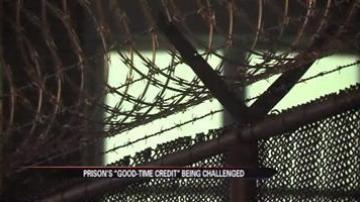 SOUTH BEND, Ind. -- ABC 57 News took a closer look at the good time credit program for violent criminals and some of the numbers may surprise you.

Due to the state mandated program, felons are only serving half of their sentences and families of local murder victims want to see that change.

For the second time this week, the Clippinger family and the Winston family rallied in front of the St. Joseph County courthouse. It is all in an effort to get people to sign a petition that urges Indiana lawmakers to end the good time credit program all together.

18,000 - that is the number of felons released from Indiana prisons each year and 97 percent of those offenders are released early because of a state law, according to the Indiana Department of Corrections (IDOC).

"Because of the good time credit law, if that offender behaves while he is in prison he will only serve 50 percent of that sentence," said IDOC spokesperson Doug Garrison Friday.

Garrison said of all its inmates, about 38 percent are put back behind bars within three years of being released.

However, those against the program said there is one very big problem with the program that is often overlooked. Offenders can have good time credit taken away, but they can earn it back.

"If, after a period of time, they demonstrate better behavior, that is no serious misconduct, they can petition to have portions of it restored," said Garrison.

In short, if an inmate is good for 90 days, they can request to get that time back. So even if the inmates misbehave, they can still get out early for good behavior.

That is what the Clippinger and the Winston families are trying to change.

Steven Clippinger and Tarrance Lee are both convicted murderers who are now back behind bars for new murder charges. Police accused Clippinger of shooting and killing his brother Matt and his sister-in-law Lisa.

Lee was charged with the murder of his estranged wife Trina Winston.

Now, the families of those victims are pushing lawmakers to take a close look at the state statue.

"It is just not fair, it's not right, there is no justice in it," said Tracy Winston.

Chris Clippinger joined forces with the Winston family to start a petition to end good time credit for violent offenders.

Under the rules of the program, prisoners are rewarded for good behavior, but they can get even more time off their sentence for completing rehabilitation programs or by simply earning a degree.

It is a system these families think is wrong, but Garrison said there are some positives in offering incentives to prisoners.

"It makes our prisons safer, it makes it safer for the employees that who have to work in those prisons and ultimately, the objective is that they will rehabilitate themselves and then don't come back to prison."

Garrison said there is one advantage to the good time credit program. If a parolee is picked up for another crime or for violating parole, then that person will have to serve the amount of time taken off their sentence before the can begin to serve time for their new offense.