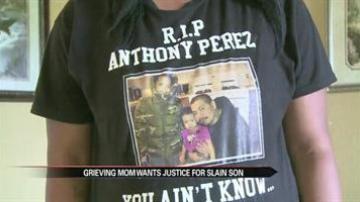 ELKHART COUNTY, Ind. -- The mother of a 26-year-old man who was shot and killed in Elkhart says no one has been charged with his murder and she's speaking out, begging for justice.

Maria Botello says every day she prays that she will just wake up from this horrible nightmare.

But instead she’s forced to face the fact that this is her reality.

Her son, 26-year-old Anthony Perez, was murdered in Elkhart on March 30.

"I remember two words my daughter said, she said, 'Mom, somebody killed Tony.' I start running out of my house, screaming loud saying, 'No! No! No! I don’t believe it!'" said Botello.

As a mother, that’s one phone call you never want to take.

"I wish no mother, no matter the color, black, white, Hispanic, live or deal with this situation I'm dealing with," said Botello.

She says what makes this even more difficult is her son’s killer is still free.

Botello has a picture taken the day after Anthony was shot and killed in his apartment.

"I was screaming asking God why he let this happen," said Botello.

Botello says she’s holding on to as much evidence as possible.

"This is the girlfriend’s clothes, the witness. My son run to her and hug her and tell her to call the police and lock the door. This is all blood all here, my son’s blood. She was wearing these the day my son died. This is blood, even go through her bra. This is her bra, all the blood is here, so we have a live eye witness," said Botello.

A live witness, who wants to testify.

"She wants to talk," said Botello.

But first arrests have to be made.

Detectives with the Elkhart County Sheriff’s Department are actively working this case.

Botello wants anyone who knows anything to call the Elkhart County Sheriff's Department.