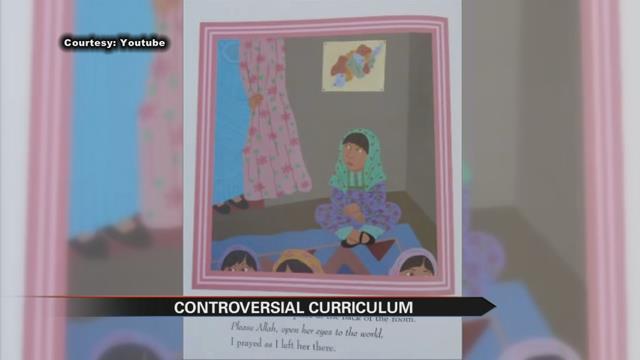 Leaving religion out of public schools has been a controversy that’s been brewing all across Michiana.

Lance Reeves said, “Down in your area down at Concord they’re having a battle over a nativity scene, now we’re having the same thing here.”

Concerned veterans and parents in southwest Michigan are upset that a book about a Muslim girl in Taliban controlled territory is being taught in Eau Claire Schools.

The book was added to the curriculum in October after the old coursework didn't meet state requirements.

Tara Fecho said, “It’s nice to know every different religion but the way that they’re showing it in the books, it’s not appropriate for especially 3rd graders and 4th graders.”

Fecho is a concerned parent with two students in Eau Claire Schools.

She said they switched over to the curriculum that Benton Harbor Schools uses called "Engage New York."

Fecho said, “Why are we doing the curriculum when it started in the middle of the school year in October?”

It's a book – based on a true story - about a Muslim girl who goes to a secret school after her parents are captured by the Taliban.

Fecho said, “It’s just not right when you have family as I have in the military and it’s showing Muslims and things in the books and everything. It doesn't make sense. It’s not fair.”

Fecho said she is not the only parent who feels this way. She said other parents were upset at the school board meeting because they said students were asked to memorize part of an Islamic prayer in the book.

There was one part of the book where the grandmother prays that Nasreen stays safe in school, it said: “Please Allah, open her eyes to the world. I prayed as I left her there.”

David Gray, the superintendent for Eau Claire Schools, released a statement: "Recently some inaccurate pieces of information have been shared throughout the community about the curriculum... at no time within the curriculum is it written or within the classroom has it been suggested that students memorize an Islamic prayer."

Reeves said, “We took the fight over to Afghanistan, over to Iraq so it doesn’t come here, but yet every day you turn around every day is coming here!”

Reeves served in the Army for 22 years. He said he fought in Iraq defending our country’s freedom including the freedom of religion.

He thinks if the school is going to teach from a religious book they need to discuss all religions, not just Islam.

Reves said, "Let’s keep this contained, let’s put it back where it belongs maybe in New York or wherever else is dealing with a diversified culture.”

School officials are holding an open meeting at the high school on January 6th at 6 p.m. to discuss parents' concerns with the new curriculum.