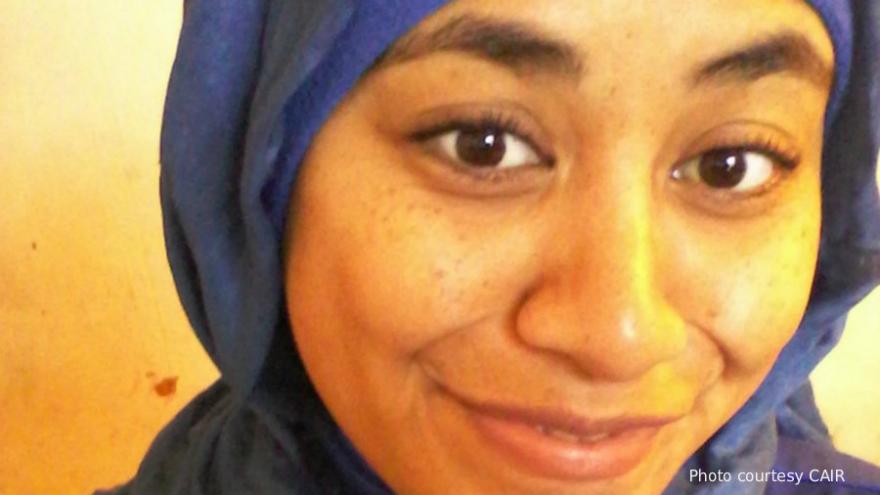 (CNN) -- The city of Long Beach, California, will pay $85,000 to settle a 2016 lawsuit filed by a Muslim woman after an officer forcibly removed her hijab, or headscarf, when she was in police custody.

The incident started when Kirsty Powell and her husband were pulled over by police for driving a "low rider" car, according to the lawsuit.

Powell was the passenger, but was arrested after police found a warrant under her name for a shoplifting incident.

Powell's husband requested a female officer handle the arrest, according to the suit, but the arresting officers denied the request and told Powell she had to remove her hijab.

Powell spent the night in prison without her headscarf. It was returned when her husband posted her bond.

The lawsuit states Powell was "forced to appear in a publicly available booking photo without her religious headwear."

Adding," As a result of the foregoing deprivations of the free exercise of her religion, Kirsty Powell suffered severe discomfort, humiliation, and emotional distress."

Powell filed the lawsuit in April 2016, alleging the police department had violated her First Amendment rights.

"She cried throughout the ordeal and experienced humiliation when both her religious beliefs and personal integrity were violated," the lawsuit said.

CNN's calls to the Long Beach City Attorney's Office were not returned.

CNN affiliate KABC-TV reported the Long Beach Police Department changed its policy in November 2016 to allow an arrested person to wear religious headgear unless there is a safety concern.

The Council on American-Islamic Relations announced the settlement in a press release praising Powell.

"We commend Kirsty Powell for choosing to defend her right to religious freedom and taking action."

Powell told the Council on American-Islamic Relations when she filed the suit she wanted to be the last Muslim woman who has this experience.

"I want my Muslim sisters to always feel comfortable and safe wearing a hijab and to stand up for what's right," she said.