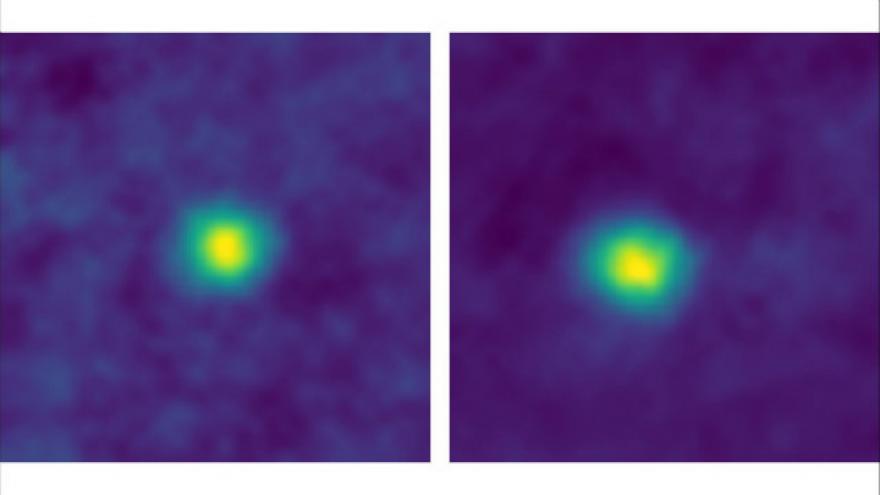 These images of Kuiper Belt objects taken by NASA\'s New Horizons were the farthest from Earth ever captured by a spacecraft. Photo courtesy NASA

New Horizons is the probe that flew by Pluto on July 14, 2015, and beamed back those amazing pictures. Now, it's zipping along at more than 700,000 miles (1.1 million kilometers) each day -- moving farther and farther out into our solar system.

NASA said in a statement that New Horizons snapped a picture of a group of stars known as the "Wishing Well" when the spacecraft was about 3.79 billion miles (6.12 billion kilometers) from Earth.

New Horizons broke its own record a couple of hours later that day by taking images of two space rocks in the Kuiper Belt, a disc-shaped region beyond Neptune that may be home to hundreds of thousands of icy worlds and a trillion or more comets, according to a NASA statement.

Compare that achievement to Voyager 1, which was 3.75 billion miles (6.06 billion kilometers) from Earth when it took the famous "Pale Blue Dot" image of our home world on February 14, 1990. NASA says Voyager 1's cameras were turned off after that, so its photography record has been unchallenged for more than 27 years.

"New Horizons has long been a mission of firsts — first to explore Pluto, first to explore the Kuiper Belt, fastest spacecraft ever launched," Alan Stern, the mission's principal investigator, said in the NASA statement. "And now, we've been able to make images farther from Earth than any spacecraft in history."

New Horizons is sleeping now, resting up for its next big adventure. On January 1, 2019, the probe will fly by a small, frozen world in the Kuiper Belt called 2014 MU69, which orbits a billion miles beyond Pluto.

MU69 will be the most distant world ever explored. Yes, MU 69 is a boring name and NASA is asking the public to help come up with a better one.

New Horizons was launched on January 19, 2006. It finished its primary mission with the Pluto flyby in 2015 and is now on an extended mission to explore the Kuiper Belt, helping the US to complete its reconnaissance of our solar system.