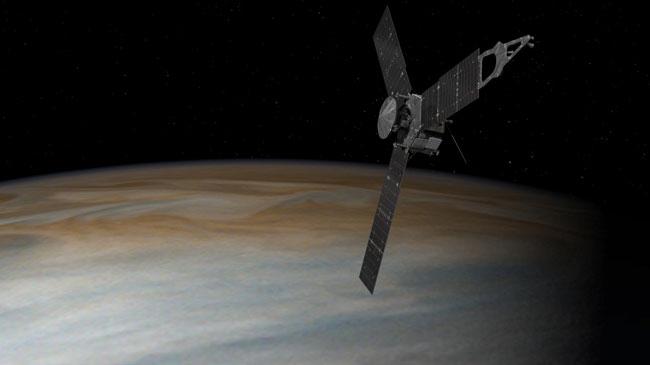 (CNN) -- It's been speeding toward Jupiter for nearly five years. Now -- can it slow down?

On Monday, NASA's Juno spacecraft -- a spinning, robotic probe as wide as a basketball court -- will perform what the space agency calls a 35-minute long "suspenseful" maneuver that will allow it to be pulled into orbit around Jupiter.

Basically, mission managers will hit the brakes, and they'll hit them hard.

"We are ready," said Scott Bolton, the mission's principal investigator. "The science team is incredibly excited to be arriving at Jupiter," he said in a NASA press release.

Juno will circle Jupiter 37 times over 20 months, diving down to about 2,600 miles (4,100 kilometers) above the planet's dense clouds.

"Some of the challenges are we are going into the most treacherous place in the entire solar system, radiation fields that are really intense," Juno Project Manager Rick Nybakken told CNN's Paul Vercammen.

Juno has seven science instruments designed to help scientists figure out how Jupiter formed and evolved. The planet is the most massive in our solar system -- a huge ball of gas 11 times wider than Earth. Researchers think it was the first planet to form and that it holds clues to how the solar system evolved.

Spacecraft have been to Jupiter before, but scientists still are puzzled by the gas giant.

What's going on under Jupiter's dense clouds? Does it have a solid core? How much water is in its atmosphere? And how deep are those colorful bands and that mysterious giant red spot?

"Jupiter looks a lot like the sun," Bolton said. But it has much more than the sun, and that's really important.

"The stuff that Jupiter has more of is what we're all made out of," he said. "It's what the Earth is made out of. It's what life comes from."

Juno will help solve the mysteries of Jupiter by looking at its interior. The spacecraft will orbit the poles and try to dodge the planet's most hazardous radiation belts. To protect the spacecraft from the radiation, Juno has a shielded electronics vault.

The camera is called JunoCam and NASA says it will take "spectacular close-up, color images" of Jupiter. NASA is asking the public to help decide where to point the camera.

Now, about those LEGO crew members. Three 1.5-inch figurines are on board Juno. One is a likeness of Galileo Galilei -- the scientist who discovered Jupiter's four largest moons. The other two represent the Roman god Jupiter and his wife Juno. They were included to inspire children to study science and math.

Juno's spacecraft body measures 11.5 feet (3.5 meters) tall and 11.5 feet in diameter. But with its three solar panels open, it spans about 66 feet (20 meters). For comparison, an NBA basketball court is 50 feet wide and 94 feet long.

You can see Jupiter from Earth without any special binoculars or telescopes. It's the bright star in the evening sky from January through August. If you do have a telescope, you can see its largest moons.

The Juno mission ends on February 20, 2018, when Juno is expected to crash into Jupiter.