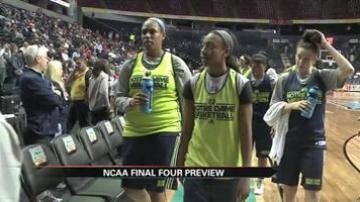 NASHVILLE, Tenn. -- Sunday, the Fighting Irish were anxious to play against Maryland in the Final Four tourney.

Everything is on the line Sunday night for Notre Dame and Maryland. There's just 40 minutes of basketball between both teams and a chance at playing for the national title.

"We're obviously not going to take them lightly," Irish Forward, Ariel Braker said. "Our game plan is to just not get down and play Maryland basketball."

It has been nearly 70 days since the Fighting Irish played Maryland and pulled off their closest win of the season, 87-83.

After two and a half months, the teams are different.

"It was a close game at their place and they're obviously a better team now but we're different team now also. So we're going to be focused on the details that we need to do to win the game," Braker said.

That attention to detail is no doubt what sent Notre Dame back to its 4th Final Four in a row.

Getting to Tuesday's Championship game and cutting down the nets is what Notre Dame is truly fighting for this 36-0 season.

"We still have the same goals that we've had all season to go out there and win a National Championship so we're going to try and make that happen," Irish Forward Taya Reimer said.

Notre Dame had three senior starters but after losing Natalie Achonwa to her knee injury, the Irish now have one sophomore and two freshman in the starting line up.