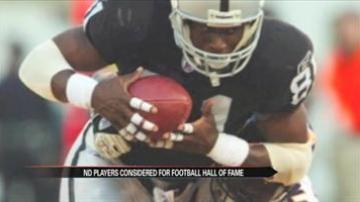 Two familiar faces may be added to the Football Hall of Fame.

Tim Brown and Jerome Bettis are both former Notre Dame football players and finalists in the Pro Football Hall of Fame.

Brown was selected in the first round of the 1988 NFL draft by the Los Angeles Raiders where he played for 16 seasons and set records for receptions, receiving yards, and punt return yards.

Bettis joined the Pittsburgh Steelers in 1996 where he became the franchise's leading rusher.