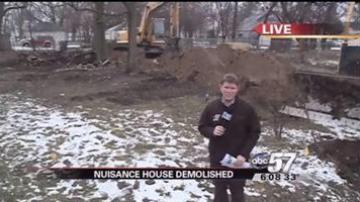 The house has been set on fire at least nine times, most of those have been recent.

The house was put on the demolition list about six months ago. Neighbors have been waiting, marking each day leading up till Wednesday.

"It creates an image that this isn't a thriving community but it is a thriving neighborhood and community," Nancy Nichols, the Pastor of Broadway Christian Parish said as the house was taken down.

"These empty houses put us at risk, especially this one that has caught fire several times, that easily could have spread to other houses."

No evidence was left behind during any of those fires to link a suspect(s) to the crimes.

1617 S. Carroll isn't the only vacant house on the block, there are several and those who live there hope that the improvements made by the city will continue.

"Looking at these eyesores every day brings down the morale of those who live here," Deshay said.

The South Bend City Code Department told ABC 57 News that there are about 450 homes on the current demolition list.

The mayor told us Wednesday that he is assigning a task force to be in charge of the abandoned house issue. More details on that task force are expected next week.

For now those who live near the house today, hope that the process just keeps going.

"I'm just glad it's coming down, I care about the people who live on this street," Nichols said.