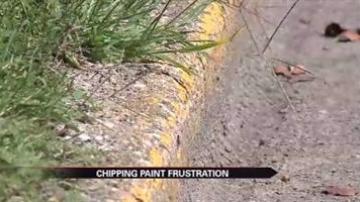 ELKHART, Ind. – Some neighbors near Weston Park in Elkhart said they think their streets need some attention. They said yellow curb paint needs to be retouched to signal to others no parkinging.

"Since there are no signs or painting they pretty much park where they want to and it makes more of a hassle for everybody else to get around them," said neighbor Randy Neal.

Neal claimed he and a few other neighbors have complained to the city, but they haven’t seen anything change.

"They got nowhere like I did so we pretty much gave up on the issue," added Neal.

We spoke to many neighbors around the area and got a mixed reaction.

Some told us that they didn’t care if the yellow curb paint was chipping.

Others said they didn’t even notice that there was any in the area.

ABC 57 spoke to the Elkhart Street Department on Monday and here’s what we found out.

The office said it tries to update yellow curb paint every year.

Members of the department told us they would check the records to see if any complaints were made from the area. The department said that would take a couple days since they had to sift through records.

The city did add that there is an ordinance that doesn’t allow parking within so many feet of any intersection. This meaning even if there wasn’t yellow visible there, it would still not be allowed.

If this is indeed a parking violation issue, it would be a different city department to ask.

Neal said he just hope this problem can be solved soon, to make it an easier trip getting home.

"It’d making parking, driving up the street, and parking easier on everybody," he said.