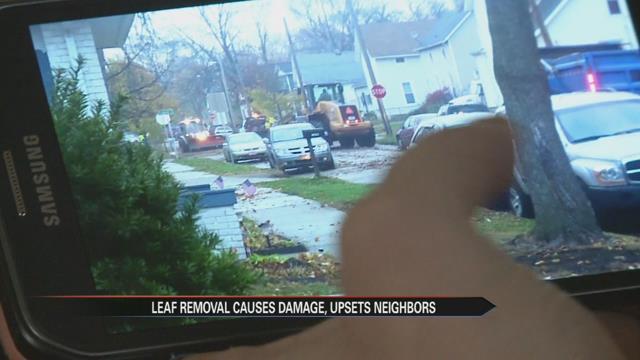 It is that time of year for street crews to pick up leaves in the city of Elkhart. One neighborhood says the carelessness of the crew working on their street caused more harm than good.

One homeowner shot video of street crews using a snow plow to pick up leaves. She says that move led to some torn up grass. But the carelessness she saw could be life threatening to some of the children on her block.

"They are flying down the road they are blocking intersections where kids are getting ready for school in the morning,” says Kirin King-Cramer of Elkhart.

King-Cramer owns a home on Hudson Street and says fast trucks and small children are a dangerous combination.

“Like I said there are kids getting ready for school,” King-Cramer says as she points to the video she recorded on her cell phone of Hudson Street.

On Tuesday around 7:30 a.m. King-Cramer stepped outside once she heard the sound of city trucks from the street department.

She grabbed her cell to record the crews cleaning up leaves in a way she says was unusual.

“Not one of the sucker leaf trucks came out,” says King-Cramer.

In the video you can see multiple dump trucks, Elkhart Street Department trucks, and a tractor with a snow plow.

“I’ve never seen plows and it just baffles me how absolutely careless they were,” says King-Cramer.

Carelessness that resulted in torn up grass for one neighbor and tractors treads in another yard.

“So I called the street department,” says King-Cramer.

She says she explained the problem on Hudson Street three times, hoping for some kind of reassurance that it would not happen again.

“The reply that I got was well ‘I guess we will be getting complaints then.’ It’s like this is supposed to be your job can you at least address this,” exclaimed King-Cramer.

King-Cramer says she is calling attention to what she describes as carelessness because the minor mess ups could turn bad fast.

ABC57 has contacted the Elkhart Street Department but has not heard back. Neighbors on Hudson Street want to make sure the incident does not happen again.