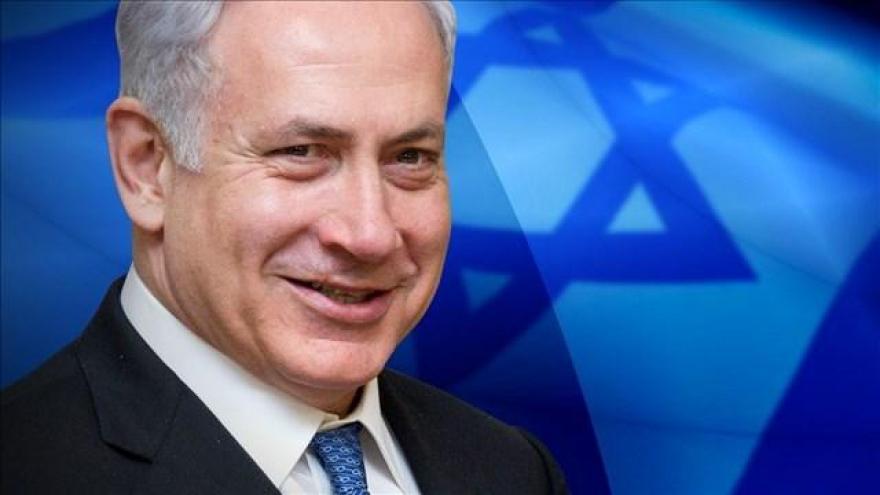 Joined on stage by his wife, Sara -- who is facing criminal investigations of her own -- the embattled PM attacked Israel's opposition and media, accusing them of trying to overthrow his premiership.

"You can see both the left and the media," Netanyahu told the crowd who responded with boos. "They are enlisting now in an obsessive and unprecedented hunt against me and my family with a goal to carry out a government coup. Their objective is to put continuous pressure on the authorities so that they'll issue an indictment at any cost with no connection to truth and justice."

Netanyahu took a page out of US President Donald Trump's playbook when he broke from Hebrew into English to emphasize the phrase "fake news."

The Prime Minister's verbal offensive didn't give much time for the actual allegations against him. He briefly addressed the two cases in which he has been questioned as a suspect, and which involve suspected bribery, fraud, and breach of trust. He repeated his signature phrase, "there will be nothing because there was nothing."

Police have questioned the Prime Minister four times during the monthslong investigation. One case, known as Case 1000, involves allegations concerning inappropriate acceptance of gifts from businessmen.

In the other, Case 2000, Netanyahu is alleged to have colluded with a newspaper owner to have negative coverage of him toned down. In exchange, Netanyahu allegedly assured the owner that the circulation of a rival paper would be reduced.

"Don't worry Bibi, all (the) people (are) with you," Shalom told CNN. "All the people of the right side. You will not fall, be strong."

That's what the Prime Minister and Likud are betting on: That the Israeli public will rally around him, and that, even if the investigation moves forward with an indictment, he can at least win in the court of public opinion.

But the clear goal of the night came from Likud Party Whip David Bitan, who didn't want to leave any doubt in Israelis' minds about where the party stands.

"Media and the left began to talk about the cracks in the Likud and they thought the Prime Minister will not be able to get through this," Bitan told CNN. "We made a rally for Netanyahu to lift the morale in the Likud and show unwavering support for him from the Likud."

But many wonder if this strong show of force can be sustained under the weight of criminal charges.

When the investigations conclude, police will hand the matter over to the attorney general. It will be up to him to decide whether to follow any recommendation to indict Netanyahu. The decision is likely several months away. But any decision to bring criminal charges would make it politically difficult for the Prime Minister to stay in power.

But Netanyahu is no Olmert, Bitan said.