Network, newspaper staffers hit by logistical headaches as they descend on Puerto Rico 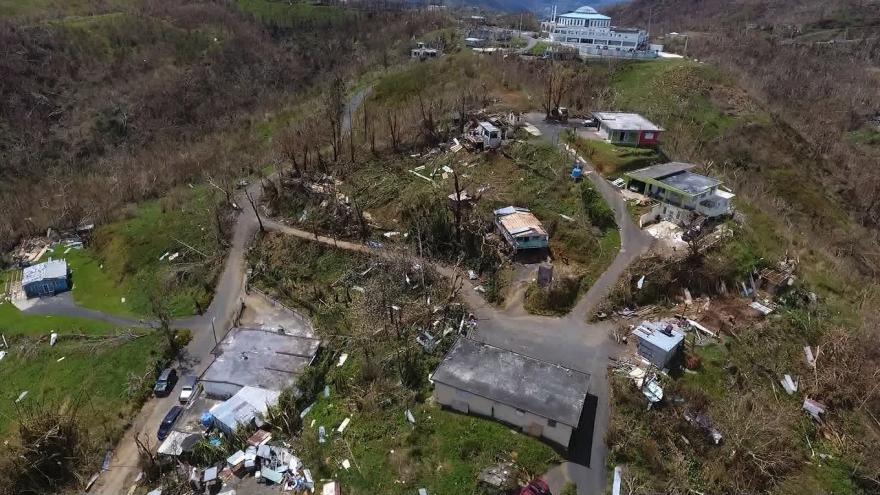 (CNN Money) -- Reporting from Puerto Rico in the aftermath of Hurricane Maria has been one of the toughest assignments for journalists, as the island is grappling with damaged infrastructure, limited commercial flights and spotty electricity and cell service. And yet, nearly every major American English and Spanish-language broadcast, cable network and national newspaper have correspondents on the ground.

The networks have not necessarily deployed their big name anchors as they did for Hurricanes Harvey and Irma and the storm and its aftermath is not attracting the same wall-to-wall coverage. Nonetheless, intrepid journalists are still getting to the story, and sometimes become the first outsiders to reach remote areas on the island.

Some reporters were in place before the hurricane hit last Wednesday. But many more have just started arriving in the past few days on the few commercial flights available, or tagging along with rescue missions and military transports. Reporters on the island are resorting to filing stories using satellite phones by dictation, relying on the few places with generators, whatever cell service and WiFi they can find (especially in the capital San Juan) and other broadcasting services like LiveU and FlyAway to get their stories online and on air.

"Most of the team is staying at hotels without electricity and water. They have relied on the local station for water and power. Needless to say, gas, food and cash are hard to get," said Telemundo spokesperson Camilo Pino.

Spanish language networks have gone all in on the coverage to cater to their Spanish-speaking viewers, many of whom may have family ties with those on the island. Telemundo sent three correspondents and one host, in addition to dozens of producers, cameramen and fixers who are working closely with the local affiliate, Pino said.

Univision has 35 people on the ground and a remote FlyAway studio for transmission, a network spokesperson said. The network had several crew on the island before the hurricane hit and have also set up interactive tools such as a website with detailed information on the statuses of towns around the island — some of which has come from crowdsourcing efforts.

Reuters' Managing Editor for news strategy and operations Don Durfee said that it's been one of the most difficult hurricanes to cover in terms of logistics, even at times eclipsing the challenges he faced when covering some of the worst hurricanes in Asia. His staff of a dozen reporters, photographers and videographers have been using satellite phones and WhatsApp, which is often faster than email, when there's cell service to file stories. Durfee said as they struggle with finding food and gas for their reporters, there's also the constant threat of being kicked out of their hotel because diesel for the generator has been so hard to come by.

"We're sending a person down soon who will be just in charge of logistics down there because this is turning into a longer term story," Durfee told CNN an interview. "That person will buy a generator, look into procuring fuel, and making sure there's an adequate supply of food and water so reporters can focus on their job."

The Associated Press has a full time San Juan-based reporter, Danica Coto, who reported throughout the hurricane's landing. Spokeswoman Lauren Easton said the wire service has a group of reporters, photographers and video journalists as well as a handful of local freelancers filing from satellite phones when outside of San Juan, and from a pop-up press center that's been set up in the capital when they're there.

Related: Puerto Rico largely ignored by the media in the wake of Hurricane Maria devastation

The Miami-Herald's Patricia Mazzei said she figured she'd have communications trouble in Puerto Rico after getting cut off from their Florida Keys team during Hurricane Irma, so she traveled with an AT&T cellphone, a Sprint hot spot and a borrowed Verizon air card, hoping at least one of them would work.

"I got lucky: My AT&T cellphone worked in much of metro San Juan, so I could email my story every evening after typing or dictating my story into the Notes app," said Mazzei, who is now back on the mainland. "While on the road, we carried a [satellite] phone to periodically check in with editors and let them know we were OK -- and have them tell us if any major news had broken that we should chase."

Mazzei said the satellite phone networks at one point appeared to be overwhelmed by the number of people using them, but were ultimately able to transmit a "painfully slow" signal for uploading photos.

The Washington Post has three reporters (one of whom is a video journalist) and a team of freelancers on the ground. Reporter Arelis Hernandez tweeted on Tuesday that she caught one of the few commercial flights out of the mainland and to Puerto Rico on Tuesday.

NBC "Nightly News" anchor Lester Holt flew in Monday with the 165th Airlift Wing from Savannah, Georgia, for two days, along with four correspondents on the ground and two other correspondents who flew in with relief trips from Florida to Puerto Rico.

CNN has had 11 correspondents and anchors through Puerto Rico including Sanjay Gupta, Nick Paton Walsh and Bill Weir. Leyla Santiago, who was born and raised in Puerto Rico, has been on the island since Irma hit earlier this month. She said that in addition to the logistical challenges, she and the crew have at times been the first people to reach certain remote areas, prompting locals to ask them for help — especially to get in touch with family.

"What I've started to do, because it's impossible to give everyone the satellite phone, when we reach the remote location we've asked people to write down who I need to call and what I need too say. So I have a pile of notes on my desk that I take back to do at night," Santiago said in a phone call from the island. "It is frustrating that you can't help everyone."

"The stories I've done lately have been some of the most important stories of my life," she added. "When I get told it's time to go home — well, this is my home."