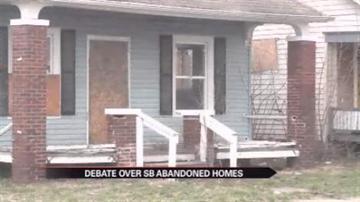 SOUTH BEND, Ind. -- 1,000 houses in 1,000 days. That is how many vacant homes Mayor Pete Buttigieg promises to tear down, but one council member is trying to stop it all with a new bill.

It is no secret that vacant houses have been the source of a lot of problems in the community, especially when it comes to crime. Yet, while some want to see them go, others want to see these houses fixed up.

It is a common sight in many South Bend neighborhoods, boarded up windows, overgrown weeds and now empty lots.

"They tore a big old house down. What’s it look like now, a big gap. Very appealing when you are trying to get more people to come into South Bend," says Johnson Street resident Ross Vardaman.

That is why councilman Henry Davis Jr. has a new bill to stop the demolition in favor of rehabbing salvageable homes.

"The thought is to use the apprentices that are working in the labor unions or trying to get their training with the labor unions to begin their process of training on the homes that need the renovation," says Davis.

Councilman Davis says redevelopment is not an option once a home is torn down. A new state statute requires there be at least a lot and half in order for a new house to go up.

"I think it’s the smartest move South Bend could do," said Vardaman. "The mayor needs to stop signing papers to get the houses torn down and get them renovated and start making money for the city on them."

But other neighbors disagree, saying it will cost more to rehab a house than knock it down.

"Maybe we don’t have to pay the apprentice, but the journeymen are going to want to be paid and we are going to have to pay for materials," says Becky Kaiser. "So, no we cannot get a house rehab that is actually livable for $6,000 or less."

It will cost the city $6,000 to knock down one house. A house that has likely been vandalized or stripped of piping, wires and appliance by thieves. That is why many neighbors feel they just need to go.

The bill will be going before a sub-committee Wednesday and with a with favorable recommendation by the council, it will be voted at the common council's next meeting April 22nd.